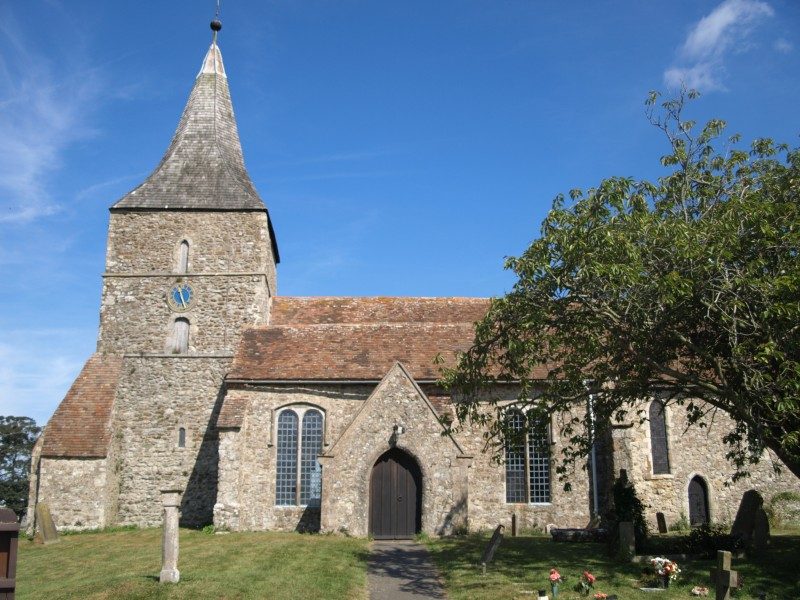 St Mary in the Marsh Church

A church has existed on this site since the Saxon era, but none of this remains today. The earliest extant parts of the church built by the Normans, c1150 , are the tower and the west wall of the nave. Soon after the end of the Norman period, c1220, the chancel was enlarged to the east, and the north and south aisles were added. There is a rectangular block of Caen stone protruding from the north wall of the chancel, said to mark the extent of the original Norman chancel. The arcades to the aisles are formed of three, typically Early English, pointed arches with two chamfered orders and columns with ‘bell’ capitals.
The Norman tower consists of three stages, with round headed openings in each stage to the north and south elevations, the north second stage one having been blocked. The third stage has a trefoil headed opening on the west side. A broach spire was added to the tower during the mid 15th century, and is finished with wood shingles.
The first picture in the gallery shows the nave and chancel at St Mary’s. There is now no chancel arch, and the former Rood screen was taken down at the Reformation in the 16th century. The Rood stair doorway can still be seen in the south wall where the nave and chancel meet.
The early 14th century four light east window is in the Decorated style with cavetto (hollow quarter circle moulding) mullions, and three quatrefoil lights to the head.
The second picture is of the double sedilia with trefoil arches under hood moulds , and adjacent piscinae, of which, unusually, there are two, both having their original drain holes.
The third photograph is of a lancet window in the south chancel wall. The stained glass is an interpretation of a biblical line from the Book of Revelation ‘Behold, I stand at the door and knock’.
Above, in the gallery, the first two photographs are of the priest’s door, and a mass dial just to right of the doorway.
Next is the 14th century octagonal font, with Jacobean wooden cover.
The fourth photograph is of a brass in the nave floor in memory of Matilda Jamys who died in 1499. The following picture is a second brass in memory of her son, William Gregory who died three years later.
Finally, a photograph taken in St Mary’s churchyard shows the grave of Edith Nesbit, the author of The Railway Children.