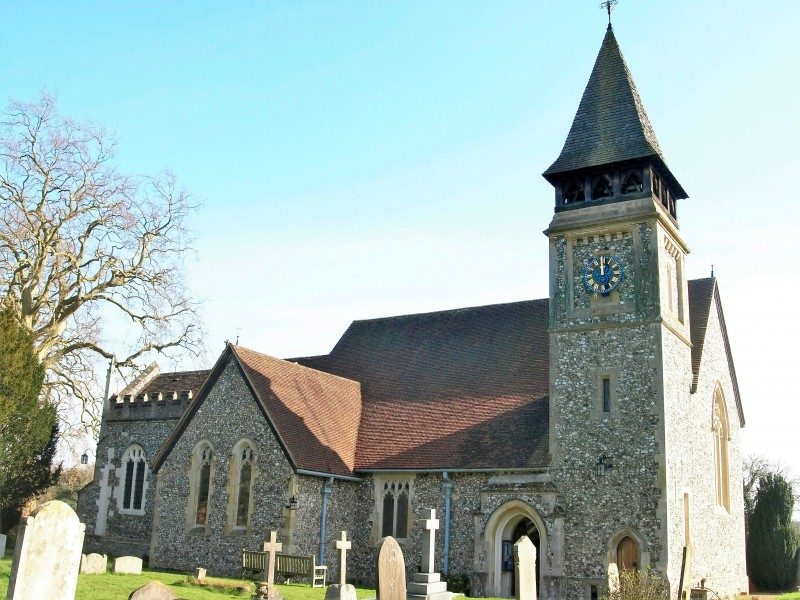 The main image above shows St Mary’s Church from the north.
Below, in the gallery, a section of the original Saxon south wall. The flint stonework includes, here and there, bricks salvaged from the ruins of a nearby Roman villa. This south wall is thought to date from the latter half of the 7th century, making this one of the oldest surviving churches in the country, built when the Saxons were converting to Christianity following St Augustine’s arrival in  England in 597AD.
Also in the picture are the blocked up 13th century doorway which was the church entrance until the present porch was built in 1866, a 15th century holy water stoup next to the blocked up doorway, and, above this, a sundial (shown next in the close-up).
The third photograph above is of the 13th century ‘weeping’ chancel which skews to the north. This replaced an  earlier apse at the east end of the nave. Originally there was no east chancel window, the east wall being decorated instead with a painting of the ‘Adoration of the Lamb’. Part of this mural is still visible in the south-east corner of the chancel.
The first picture in the gallery above shows the D’Abernon family brasses in the chancel floor in front of the altar rail. At the top of the picture (and on the left looking back from the altar rail) is the brass  of Sir John D’Abernon who died in 1277. It is the oldest surviving brass of its type in the country and is in remarkable condition, even retaining some of the original blue Limoges enamel on the D’Abernon coat of arms on Sir John’s shield.
The brass on the right is of Sir John’s son, another Sir John, who died in 1327. On the other side of the 1277 brass is the ledger stone without a brass of the third Sir John D’Abernon who died before 1350.
The second photograph is of a 13th century oak chest which stands against the nave south wall. It has three locks, thereby requiring the presence of all three key holders to open it.
The last photograph is of the Norbury Chapel which was added at the north side of the chancel c1500 by Sir John Norbury. He is commemorated by the kneeling figure seen centre right in the photograph. Most of the memorials in the chapel are to Vincent family members who became Viscounts D’Abernon.
Also in the picture seen set into the lower right side of the east wall is an extremely rare Roman funerary casket dating from the 2nd century. It contains the ashes of the 16th and last Viscount D’Abernon, Sir Edgar Vincent, UK Ambassador to Germany between 1920 and 1926.