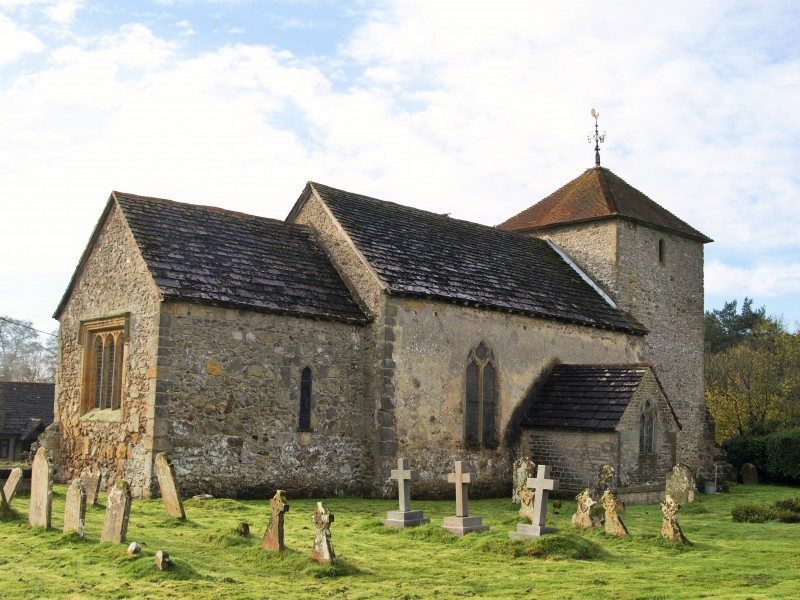 The parish church of St Mary the Virgin has an aisleless nave and chancel which date from the 11th century. This is evidenced by the typically Saxon or Saxon/Norman transitional ‘long and short’ stone work in the south-east nave quoin and the north and south doorways with tall, narrow round-headed rerearches. Much of the rest of the church is 12th century Norman and has suffered little ‘remodelling’. New windows were fitted in the chancel in the 13th century, and to the nave in the 14th. The tower, with its hipped roof was rebuilt c1600.
The feature photograph above shows St Mary’s from the north-east.

The first photograph in the gallery above shows the south doorway, and the second is of one of the 13th century lancet windows in the chancel.
Next is a view of the chancel seen from the nave. Unusually, as well as the Norman chancel arch, there is also a round arch over the sacristy, suggesting that this was where an apse originally existed, before it was removed and the east end of the church finished square.
To the north side of the chancel arch, there is a 13th century, pointed arch, which was probably a recess for a side altar.
The three light cinquefoil east window dates to c1480 and has heraldic glass dated 1638.

The first photograph in the gallery above shows half of the two-light north window in the nave. The glass is 17th century and depicts Brian de Stopham d.1277.
Next shown is a picture of two of a series of 17 brasses along the nave and chancel floor, now under carpeting. They embellish the tomb slabs of the Barttelot family which held the Stopham estates from 1428 to 1738. The brass on the right is to Sir William Barttelot, who died 1601 aged 97, and his wife. The inscription on the left brass, in convoluted Latin, is to Richard Barttelot d.1482, and is wife.
The third picture is of the octagonal font. It has a quatrefoiled bowl, and is probably 14th century.
The fourth photograph shows the blocked four-centred west doorway, and the last is of the piscini in the south wall of the chancel. It is round-headed, and  dates from the early 13th century.
.