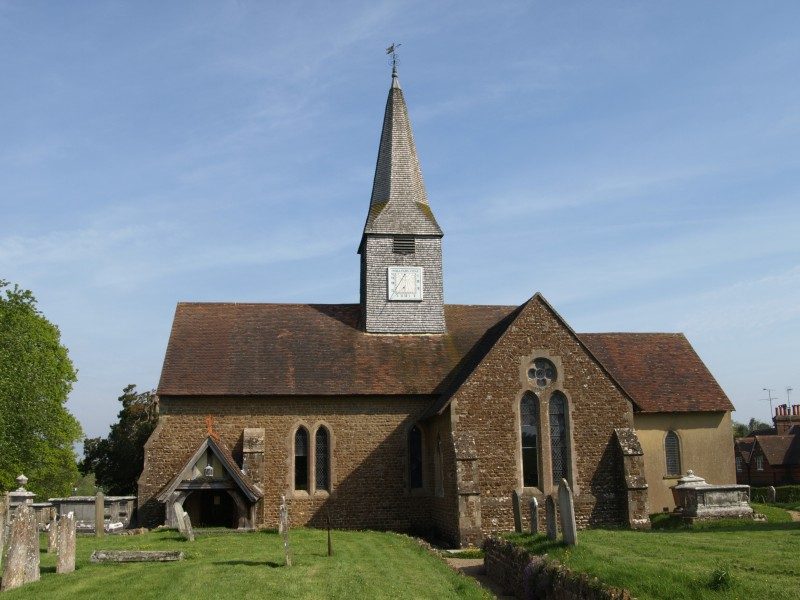 The Church of St Michael and All Angels

The Saxon church of St Michael and All Angels’ viewed from the south, is shown above.
The church features a 14th century shingled timber bell turret and broach spire supported internally on a massive oak frame. The large board sundial on the south face of the turret is inscribed ‘Hora pars vitae’ (An hour is part of life’).
Most unusually, the original Saxon nave and chancel remained substantially unaltered from the 12th to the 19th century, with the exception of the fenestration and the addition of a south porch c1230. The north aisle and vestry were added in 1855, followed by the south transept, new south porch, and west nave extension in 1884.
The first picture in the gallery above shows the Saxon nave and chancel. The 13th century chancel arch is built of hard chalk and has two chamfered orders. The panelled timber pulpit is late 19th century. The three light east window has stained glass installed in 1897 depicting the Resurrection.
The next two photographs show one of two 11th century double-splayed Saxon windows in the north wall of the chancel. There is a third in the north wall of the nave. All three are deeply cut and retain their original oak frames. The third photograph shows the chancel window from the outside, with plate glass cover to preserve the ancient oak frame.
The first picture in the second gallery is of the font, which is original, dating from Saxon times. It is carved from a single huge block of Bargate stone, and has a chevron band of decoration around the top, and, lower down, a moulding of semi-circular section.

The second picture shows the late 19th century reredos which depicts ‘The Adoration of the Magi’.

Next shown is an oak chest which stands close to the font in the west nave extension. It dates from 1622, and typically has three locks, thereby requiring keys from three different persons to open it.
The fourth photograph is of the ‘Tree of Life’ vestry screen. The screen was dedicated in 2008 by the Dean of Guildford cathedral. The engraving relates to a serious fire in 2006 on Thursley Common Nature Reserve, a site of Special Scientific Interest, and the subsequent natural regeneration. The left hand door depicts a birch tree engulfed in flames, but on the right hand door the tree is shown bursting into leaf. The image can also reflect the Resurrection.
.