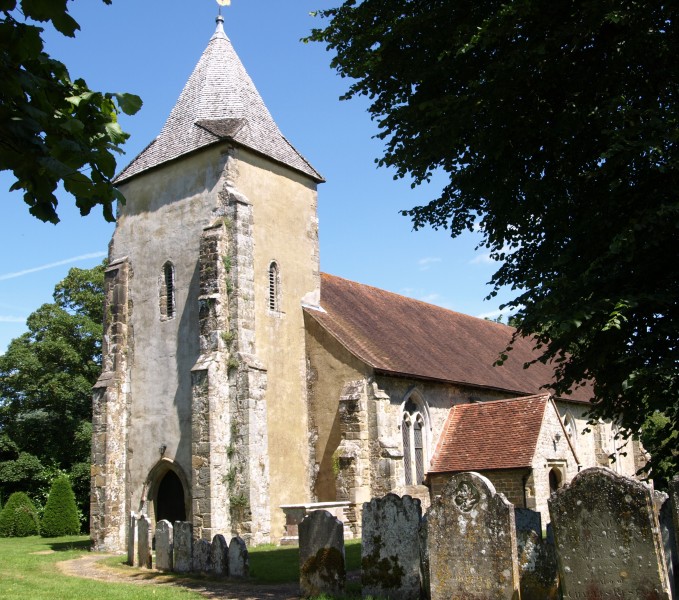 St George’s at Trotton is a lovely little church, which, unusually, consists of a through  nave and chancel undivided by a chancel arch. A chancel screen and rood-beam would, pre-reformation, have divided the two sections of the building.
The nave and chancel are early 14th century, having been rebuilt c1300. The west tower, with broach spire, is older, dating to c1230.

The three light east window has glass dated 1857. The centre light depicts the Crucifixion, and the outer lights have ‘grisaille’ glass ie patterns on a grey/white background.

Murals on the west wall were uncovered in 1904 during removal of whitewash. In the centre, Christ in Judgement is shown above Moses with the ‘Tables of the Law’. There is a consecration cross below Moses and above the west door. To the left (facing the murals) is the Carnal Man surrounded by the Seven Deadly Sins (pride, lust, gluttony, anger, sloth, envy, avarice).
The right hand (north) side of the west wall has retained its colours making it easier to read. It depicts the Spiritual Man surrounded by the Seven Acts of Mercy, towards The Naked, The Hungry, The Thirsty, The Sick, The Stranger, The Prisoner and The Dead.

The plain ‘tub’ font is from the 12th century, pre-dating the present church building itself, possibly therefore surviving from an earlier church on the site.

Above left: One of the two medieval brasses. This one is set in the nave floor where it is protected by a carpet. It is a memorial to Margaret Camoys, and dates to 1310 making it the oldest full length brass of a woman in the country. The other fine brass is set on a low table-tomb in the centre of the floor adjacent to the chancel step.  This too is a memorial to the Camoys family, and shows Thomas, Lord Camoys, (d1421), and his wife. They are depicted holding hands, as was common between 1360 and 1430.