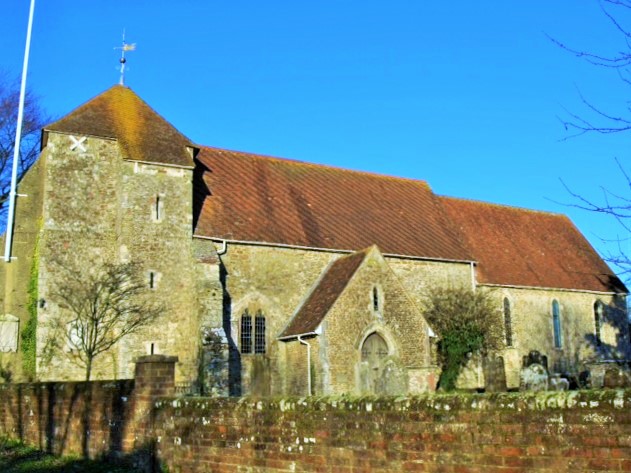 Although recorded in the Domesday book of 1086, when the name was Dodimere, the oldest extant part of the church at Udimore dates from the 12th century. The north wall of the nave, excluding the top 1 footbut including the taller one of two blocked semi-circular headed doorways, are from this time, c1170.
c1200, a south aisle was added, but this was later removed leaving the blocked three arch arcade.
A chancel was added early in the 13h century, soon after the south aisle, and then the tower was built c1230.
Unusually, the chancel is a little wider than the nave. Its build date is confirmed by the three stepped east lancet windows withconcentric rere-arches, and by the chancelarch, which has a pointed head of two orders, the inner one being supported on corbels with typical dogtooth mouldings.
The tower arch, has a double chamfered head and semi-octagonal responds, the north one having alternating light and dark stones.

There are two fonts at St Mary’s. The main one, in front of the tower arch, dates from 1898. Of greater historical interest is a wooden font dating from the 18th century. It has been plastered to disguise the fact that it was made from wood, the use of which, for fonts, was banned after the Reformation.

In the 19th century a porch was added, built onto the centre of the three former south aisle arcade arches. It incorporates a 15th century door.
Above the porch door is a small lancet window (third photograph in the gallery) with lovely stained glass, dated 1905, depicting the Madonna and Child. The inscription below reads ‘to the Glory of God and in memory of a short vicar late 1897 – 1905’.

Above: The piscina in the east respond of the south arcade (first picture in gallery). It is similar in style to the westernmost of the arcade arches, dating it to c1200. The large piscina in the south wall of the chancel has a segmented head and is probably 13th century. Also showing in the second gallery photograph is the stone string course which links the window sills.
The large centre pier of the south arcade has stiff-leaf carving on the capital. This stylised foliage decoration is typical of the Early English Gothic period.