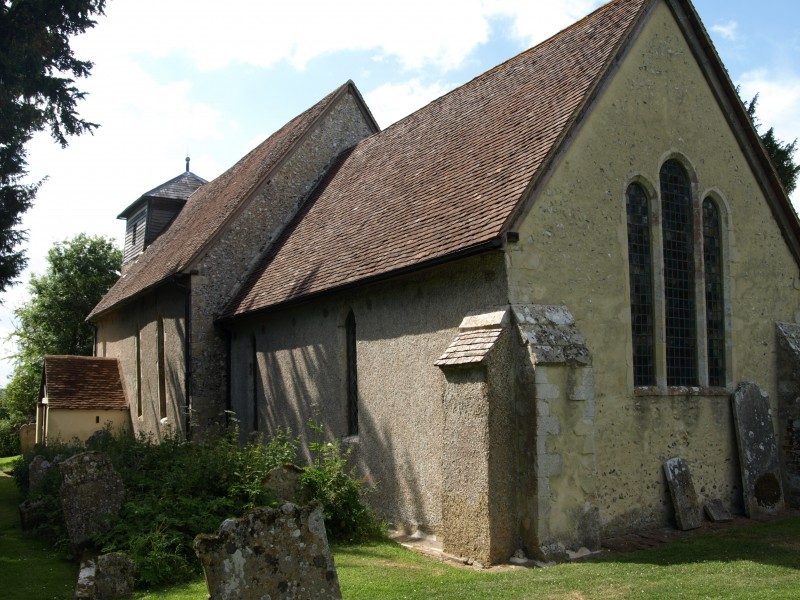 It is difficult to find this little church which is hidden away in trees, surrounded by a large churchyard. (Go up a farm track and look for a grassy parking area on the left). St Michael’s Church is almost entirely unaltered 13th century, but there is evidence of an earlier church, one having been given to Lewes priory in 1121. The west wall of St Michael’s may well date from that time or before, being only 2ft thick.
Pre-Conquest stone forming the abaci of the inner arch to the chancel is in fact re-used, perhaps coming from the chapel that once existed at nearby West Marden.
Shown in the first gallery photograph is the nave at St Michael’s looking towards the chancel. There are two chancel arches, the inner triangular one was built c1625 to support the original 13th century arch, which was in danger of collapse.
In the foreground is the plain font with tapering bowl. It probably dates from the 13th century.
The chancel has plastered and painted walls, a wagon roof, and a brick floor, combining to give St Michael’s  a simple but charming feel. There are north and south lancet windows, and a triple lancet east window, all of which are 13th century. On the right hand (south) wall there is a contemporary piscina with trefoil head.
The altar rails have turned balusters and date to the 18th century, as do the chancel box-pews.

There are four consecration crosses in total, painted on both sides of the chancel. They are thought to date from the 13th century when the church was first built and consecrated by the bishop.
There are also wall paintings on the nave north wall which were discovered only recently, in 1994. One of the nave murals is shown in the gallery. This one is somewhat clearer than most of the paintings, and shows  a saint holding a staff. It is probably a depiction of St Christopher, and  possibly dates to the 15th century.
Also shown in the gallery, are the north east nave lancet window, and trefoil-headed piscina below, and the stone pulpit which is Victorian. It is carved with ogee-headed arcading between bands featuring varied motifs.