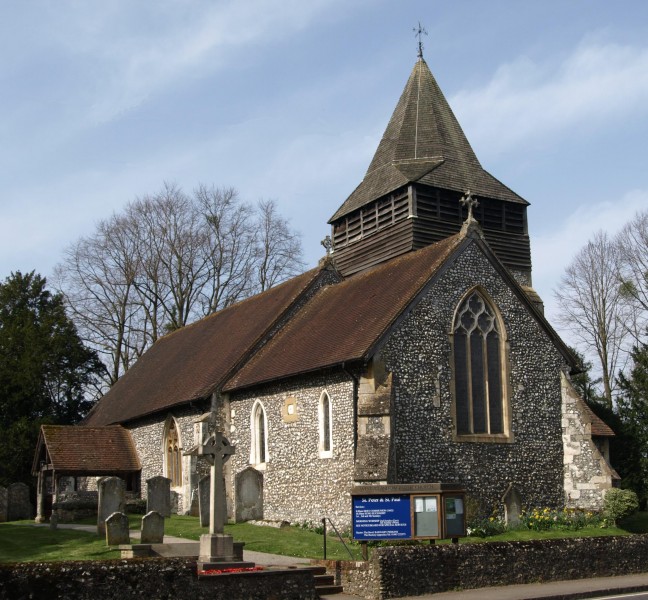 This flint rubble and stone church was built by the Normans in the 12th century. It adjoins Clandon Park, the National Trust’s palladian mansion which was built in the 1720s for Lord Onslow.
Shown below in the gallery is the rear elevation of Clandon Park taken from the short path up to the church. The daffodils are amazing in the spring and mistletoe grows in the trees.
This photograph was taken before a devastating fire on 29th April 2015. The fire started in the basement of the mansion and quickly spread up through to the roof, causing virtually all of the interior to collapse down into the basement.  A restoration project is underway funded largely by insurance at an estimated cost of £65m.
The nave is the oldest extant part of the church, dating from the time of Henri de Blois, grandson of William the Conqueror, and younger brother of King Stephen. Henri was patron of West Clandon, then in the diocese of Winchester, where he was Bishop from 1129 to his death in 1171. It was towards the end of his bishopry that Henri oversaw the rebuilding of the previous Saxon church.
Above, second photograph in the gallery, is the chancel which was rebuilt c1220 replacing a timber Saxon apse. The tower was also added in the early 13th century. The east window is 14th century, and replaced an earlier three lancet window. It was re-glazed in 1874 in memory of Onslow family members. The glass depicts St Peter holding crossed keys, and St Paul with right hand raised, the two referring to the church dedication. In the centre, Jesus is shown holding a lamb, a reference to ‘The Good Shepherd’.
The third photograph shows the font which dates back to the 12th or possibly early 13th century. It is made from Sussex marble, a fossiliferous limestone found in Weald clay. It is similar to Purbeck marble, and is also variously known as Petworth marble, Bethersden marble, Laughton stone and ‘winklestone’.
The wooden cover, used to preclude theft of the holy water, is 17th century, and the corner pillars are modern, presumably added to stabilise the bowl.
The first photograph in the gallery above is of a wooden carving on the north wall of the nave, opposite the font. It is a depiction of the Clandon Legend. The tale is of a soldier who set his dog upon a dragon, and obtained a pardon for desertion when the dragon was killed. Unfortunately the original carving was stolen.
The second picture, is of the pulpit which is 19th century, having been installed to replace a Jacobean wooden one. It is made from French stone with black marble pillars.
The third gallery photograph shows a medieval triptych set in an early 13th century sedilla on the south wall of the chancel. It  shows St Paul, St Thomas of Canterbury, and St Peter.
Next is a sundial on the south wall. It has three concentric circles for showing the time of day and the time of church services.
Finally, is a view of the south wall of the chancel with two piscinae, one round headed and one square headed. The latter is set below a splayed lancet window with stained glass dedicated to ‘a beloved sister SAH’.