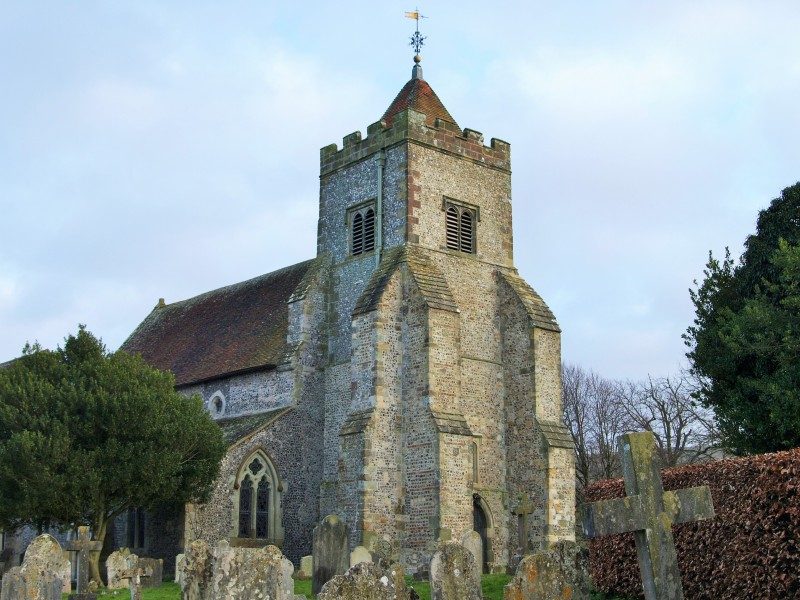 A reset semi-circular headed doorway in the north aisle indicates that a church existed at West Firle at least as early as the late 12th century. Parts of the current building, namely the chancel and the tower, date from the 13th century, and the north and south aisles are 14th century, having been rebuilt at that time. The chancel arch was also rebuilt in the 14th century. The heavy buttresses on the tower were added in the 15th or 16th century.
There are four arcade bays on either side of the nave. The piers and responds above are octagonal, and the heads are double-hollow chamfered.
The chancel arch has two moulded orders.

The stained glass in the east window depicts the crucifixion, and there is a wealth of other fine stained glass in the church. The window in the south aisle has glass depicting Martha and Mary. The east window in the Gage chapel features really beautiful colours and depicts the Tree of Life. A double lancet in the north aisle has roundels depicting the Nativity and St George

At the eastern end of the north aisle is the Gage chapel, now used as the Vestry. It was built in its present form by John Gage the younger c1595, although it is likely that there was an earlier structure there which was altered to form the Gage family private chapel with a burial vault below. The entrance to the Gage chapel from the north aisle is via a doorway with a four centred arch. Above and around this doorway are three fine brasses which date from the 16th century. To the left (north) of the doorway is a brass of George Gage d.1569. Above the doorway is the ‘Bolney Brass’ which is to Bartholomew Bolney (d.1476), Lord of the Manor of West Firle, and his wife, Eleanor. To the south of the doorway, the brass is to Thomas Gage d.1590, his wife Elizabeth and two daughters, shown kneeling.
There are three tomb chests in the Gage chapel. The one shown below has alabaster figures of Sir John Gage d.1556, in full armour and with a ram at his feet, and his wife Philippa in a long gown.
The font  has a square bowl with incuse (impressed) quatrefoils on each side. This part of the font is 19th century, whilst the arcaded stem is much earlier, possibly 15th century.