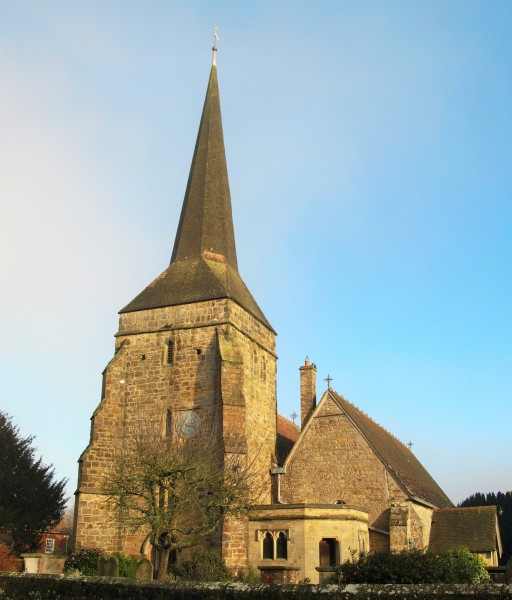 St Margaret’s dates from the 11th century, but whether it is Saxon, c1060, or Norman c1090, when records show the church being given to Lewes Priory, is open to debate. Certainly, part of the north nave wall including a small blocked round-headed window is late 11th century Norman.
The church was enlarged c1175 by the addition of a south aisle.
The main photograph above shows St Margaret’s from the west. The porch and vestry are modern additions.
The first photograph in the gallery above is of the small Norman/Early English transitional west window in the south aisle, contemporary with construction of the south aisle c1175.
Nothing is known of a Norman chancel, the western section of the present chancel being early 13th century. This was lengthened c1250, and some 20 years later a south chapel was added. The second photograph in the gallery shows the chancel decorated at Christmas. The beautiful stained glass in the east window was installed c1870, at the time of the church restoration. It depicts Christ in Majesty, and shows traditional images, including St Peter with the key to heaven (top left), St Catherine with the spiked wheel symbolising her martyrdom (bottom right), and the four evangelists (bottom centre) shown by the emblems with which they have been represented since biblical times:
Matthew – human/angel;  Mark – lion;  Luke – ox;  John – eagle.
The third picture is of the south wall of the chancel showing the mid 13th century piscina and triple sedilia with moulded trefoil heads on shafts.
The first picture in the gallery below shows the 17th century clockworks, which were mounted in the nave, after the tower clock was fitted with an electric mechanism. Next shown is the font, which dates from 1180 and is made from Sussex marble. In 1870 the corner columns were restored in Purbeck marble, the Sussex marble at Petworth having become exhausted.
Shown next is an opening in the south arcade wall, between the south arcade arches, which would have been the access to the rood loft from the top of the rood staircase.

Above are photographs of three iron tomb slabs at St Margaret’s. They are witness to the importance of the iron industry in this part of the Weald during the 16th and 17th centuries. The iron tomb covers are memorials to members of the Infield family, local Wealden ironfounders. The fourth photograph in the gallery is of the slab set on the south aisle wall which, unusually, has a brass inscription plate, dating it to 1635. The fifth and sixth photographs are of tomb covers dated to 1619 and 1624 respectively.

Lastly is a picture of a brass plaque inscribed “ Ann Tree of this parish who for her faith was burnt at the stake in the High Street of East Grinstead on 18th July 1556.”