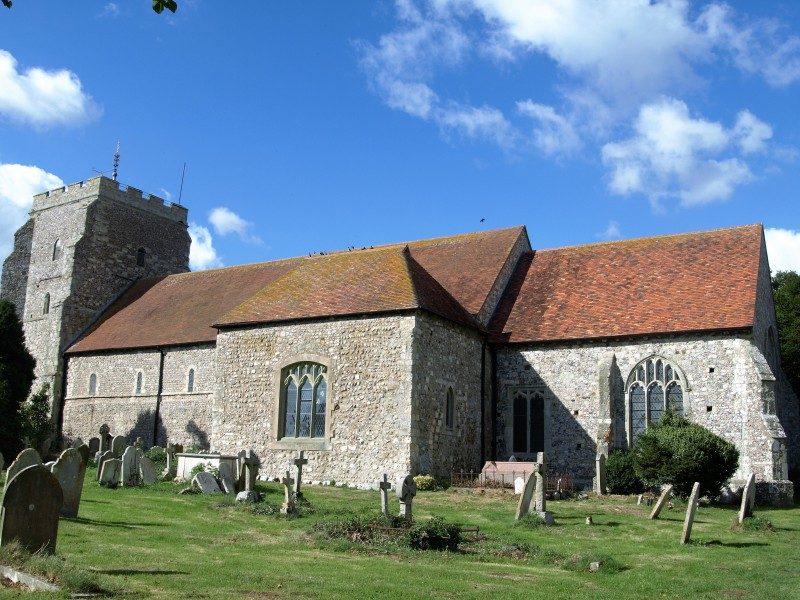 Possibly the first church that the Normans built after the Conquest, St Mary’s at Westham was originally a late 11th century church with a cruciform plan. The south transept remains and is now known as the Priesthawes Chapel. The north transept now forms the eastern end of a late 14th century north aisle. The tower was added at the west end of the nave, also in the late 14th century. The chancel, possibly originally apsidal, was rebuilt in its present form c1420.
A north porch of striking flint and stone chequerwork was added in the late 15th century, and can be seen in the first gallery picture below. The west section of the north aisle under a hipped roof is now used for toilets and a kitchen.
The second photograph in the gallery above shows the nave looking towards the east end of the church. Showing in the picture is part of the north arcade of five pointed 14th century arches, and the nave roof which has crown posts at the west end, but queen posts in the main section. The third photograph is of the nave looking in the opposite direction, towards the tower arch.

The first photograph in the gallery above shows the bottom section of the original rood stairs, now shut off with a metal gate, the rather impressive 20th century rood loft, and just above the left-hand end of the loft, the top end of the loft stairs.
The next picture is of three 11th century windows high in the south wall of the nave. They sit just above an external string course, suggesting that there was once a lean-to building or cloister below the windows. The westernmost of the three windows has stained glass depicting The Baptism. The third photograph is also of the south nave wall, taken from the north-west staircase, through a north arcade arch. A 14th/15th century square headed window is far left in the picture. It has stained glass depicting St George and St Hubert, and dates from 1919.

The fourth picture is of the octagonal font which probably dates from the 15th century. It has trefoil headed arcading to the bowl and to the stem. Next shown is a 13th century piscina in the Priesthawes Chapel. It has a double trefoil head.