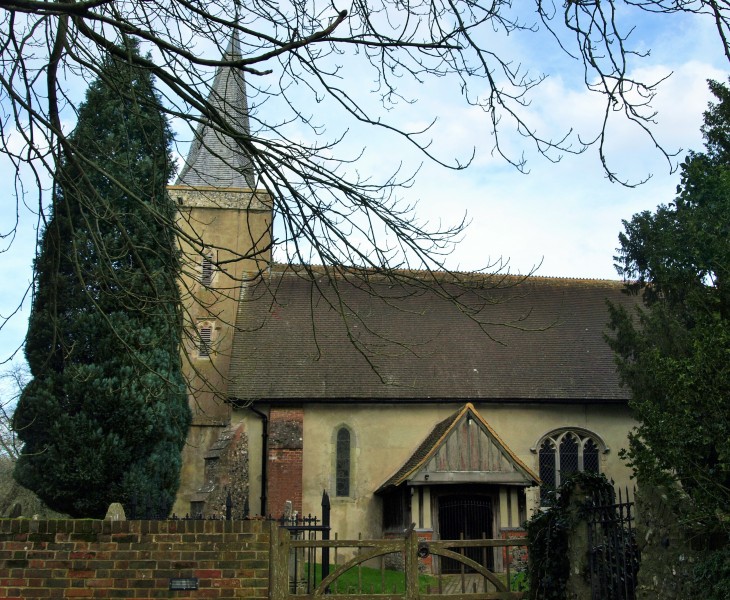 A church at Westwell dating from Saxon times is recorded in documents held at Canterbury Cathedral library. Archbishop Aelfric bequeathed Westwell manor and church to Christ Church, Canterbury in 1005, and Archbishop Lanfranc confirmed this in 1070.
There is little Saxon, or indeed Norman, structure remaining,  save perhaps for masonry in the lower sections of the tower where the mortar joints are very wide, typical of Saxon work.
The main fabric of the nave, chancel and tower is Early English dating from c1250. The first picture in the gallery below is a general view looking east through the nave towards the chancel. The second is a closer view of the chancel screen. This fine three arch trefoil headed screen, supported on slender pillars over 5m high, is a very rare architectural feature, and a crowning glory of the church.
The third photograph shows the 13th century chancel. The triple light east window has a central lancet with glass depicting a Tree of Jesse (the father of David), which shows the descent of Christ from David.
Below the left lancet is a recess that was formerly a safe for holy vessels, the hinge positions still being visible. Under the right lancet there is  a second aumbry.
Below in the gallery, first picture, is a window which is in the north wall of the north chantry (vestry). It dates from 1397 and has original glass depicting the heraldry associated with Edward the Confessor and Richard II.
The second photograph is another view of the sanctuary showing part of the 13th century stone vaulted roof and two high level lancets and a circular window above the triple lancets.
Next is the square 12th century Norman font with an arcaded bowl of Bethersden marble. It is now supported on modern concrete pillars.

Above in the gallery are photographs of the sedilia and piscinae. The triple sedilia is in the south wall of the chancel and dates from c1330. Opposite, in the north wall are three other stone seats. The sedilia is of Bethersden marble, with three cinquefoil heads, and there are stone elbows on the two outside jambs. Unusually, the left hand and centre seats are at the same level.
The two piscinae are to the east of the sedilia. The easternmost one is 13th century.