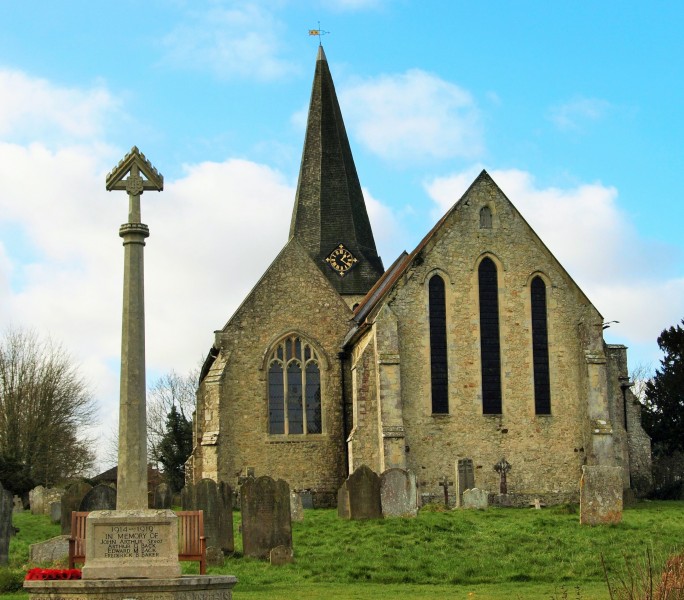 Whilst a church at Woodchurch is referred to in the Domesday Book of 1086, the present building dates from the early 13th century, soon
after the end of the Norman period when round door and window arches had been superceded by the typical pointed arches of the Early
English Gothic period. The east window consists of three tall Early English lancet windows.
On approach to All Saints from the east, it is apparent that the13th century wood shingled spire leans considerably to the south. The angle that the spire leans has been measured at 18 degrees.

The north porch has a room above called a parvis, (really a misuse of the word). These rooms were used variously as, priest rooms, school rooms, stores and even prisons.

The second photograph in the gallery shows an unusually well preserved section of the stairs which led to a Rood Loft before it was removed at the Reformation.
The third photograph is of stained glass in a south aisle window dating from c1220. It depicts apostles attending at the dying Virgin Mary.

Along the south wall of the chancel are 13th century double piscinae and triple sedilia. The piscinae have fine trefoil arches.
One of the oldest brasses in the country, which is in its original ledger stone, was moved from the nave to the floor in front of the pulpit, where it is protected by a carpet. It dates from 1333, and the Lombardic inscription confirms that it is to a Nicholas De Gore.
The Harlakenden brasses, (the third picture in the gallery above) are mounted behind the lectern. The top row is an inscription to Roger Harlakenden (d.1523). The second row are shields with the Harlakenden arms, and the third row are Roger’s son, Thomas and his wives Elizabeth and Margaret and the 10 grandchildren. Below this is the memorial inscription to Martin, son of Thomas, and the fifth and last row is the inscription to Thomas and his wives.
Also shown in the gallery is one of two hinged seats at the end of the choir stalls, which, when upturned, allow use of the misericord, a projecting ledge on the underside of the seat for support when standing.