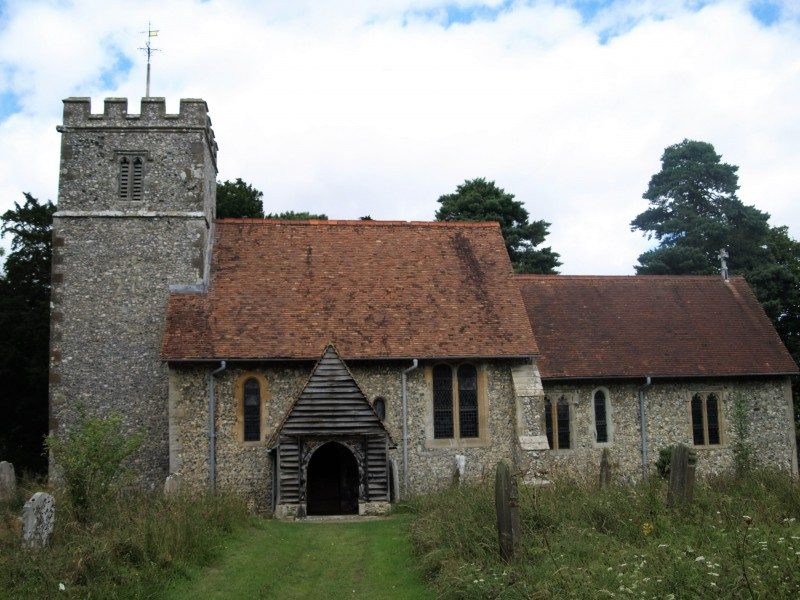 The Street, Wormshill, Kent ME9 0TT
» View on Map

The consensus of expert opinion is that St Giles Church at Wormshill was built towards the end of the Saxon era. The third picture in the gallery below shows a double splayed late Saxon or very early Norman window in the south wall of the nave, next to the porch. It is glazed with stained glass depicting St Giles with a deer, after the legend of ‘St Giles and the deer’. The glass is dated 1879, the time of the Victorian restoration.
The second photograph is of the top of the main east window. The stained glass is very old dating from the 14th century. The four main top lights depict the Coronation of the Virgin. From left to right they show: An angel with an incensor; an angel crowning Mary; the Lord Jesus; another angel with incensor.
The 11th century nave was extended to the north in the 13th century to form a north aisle with a secondary chancel at its eastern end. This perhaps was a Lady Chapel, and was certainly screened from the main body of the church.
The first stage of the tower was built at the west end of the church at the same time as the nave extension. A second stage was added in the 15th century.
The south porch is either 13th or 14th century.
The second gallery below shows the holy water stoup in the porch to the right of the south doorway, and a shouldered head aumbry next to a piscina with a semi-circular head in the chancel.
The third photograph is of a lancet window in the north wall of the north chancel. The glass dates from the 14th century and commemorates the marriage of Margery de Gatton and Simon de Northwode, c1307. The arms of the two families are impaled on the shield at the top.
The fourth photograph shows the nave and west end of the church looking back from the chancel. The chancel arch dates to the restoration of 1879.
The final picture in the gallery is of the font which has a lead lining and dates from the 11th century, either Saxon or very early Norman.

The final gallery below relates to the north chapel/chancel. There are two items of interest set against the north wall. The first is a rare 13th century chest with trefoiled arcading, and the other is a section of a 14th century carved oak screen, formerly below the rood loft which was dismantled at the Reformation.