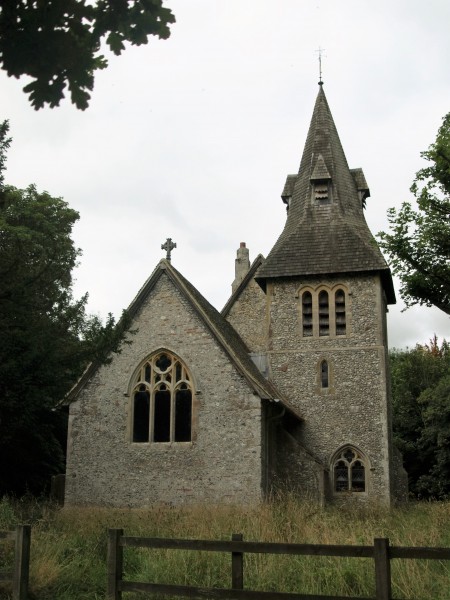 A church at Wychling was recorded in the Domesday Survey of 1086. It is very likely that the original church was a wooden Saxon building, and that this was soon replaced after the Conquest by the Normans. The external walls of the chancel, whilst being largely of flint from the North Downs, incorporate some re-used Roman materials, particularly a type of flooring called Opus Signinum. (A technique that the Romans inherited from north Africa during the 1st century BC, involving the formation of tiles and paving from crushed tiles and other fragments mixed with lime mortar). There are also some Roman bricks in the west wall of the nave.
Shown first in the gallery below is a blocked Norman doorway in the north wall of the nave. It has a semi-circular arch of three orders, the central one being a roll, and scalloped capitals each side.
The next photograph is of the south doorway, showing the very tall Saxon-like rerearch, which could be either Saxon or very early Norman.
The final picture in the gallery is of the chancel arch, and chancel beyond with Perpendicular style east window.
The second gallery below features views of the roof timbers, a piscina, and a hagioscope.
The roof is a typical ‘crown post’ construction. Also showing in the photograph is some of the gas lighting at Wychling.  St Margarets is the only church in Kent that still has gas lighting, there being no electricity in the church.
The 13th century piscina in the chancel is now very close to the floor which was raised at the time of the Victorian restoration, presumably to reduce problems with damp. The sanctuary floor is finished with mosaic tiles, an unusual feature in rural parish churches where the budget for restorations would normally preclude this.
The third photograph is of a hagioscope or squint which is to the left (north) of the chancel arch. Unfortunately the original view of the altar through the squint is now somewhat obscured by the panelling of the modern vestry.

A valuable find during the restoration was a Saxon font with lead lining. For safe keeping, this is now held at Canterbury Cathedral, thus a photograph is not included here. A modern pedestal stands to the east of the entrance door, and can be used to mount the ancient font for baptisms.