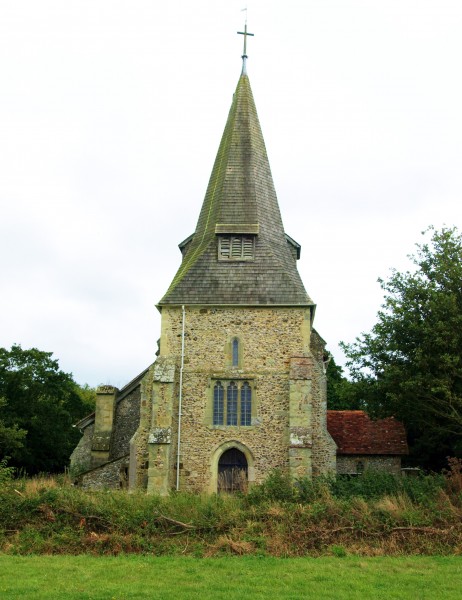 Early English churches were often dedicated to St Pancras after Augustine brought relics of the saint to this country during his mission here in 598 AD. St Pancras had been martyred in 304 AD, at the age of only 14, for refusing to renounce his Christian faith. The young age of St Pancras at the time of his execution later led to him becoming the Patron Saint of Children.
The flint and stone built church of St Pancras is of Saxon origin, parts dating possibly from c890. Clear evidence of the building’s Saxon past is provided by the large ‘long and short’ corner stones in the external masonry, and by the small, typically Saxon, window to the right of the porch. This window also incorporates re-used Roman bricks in the arch. Roman materials can also be seen in the east wall of the Lady Chapel, and in other places in the church walls. Archaeological excavations between the church and Arlington reservoir produced finds which indicate a Romano-British settlement probably existed by the River Cuckmere at Arlington. In the late 19th century , remains of timber buildings, pre-dating the stone Saxon church, were uncovered during restoration work at the church. The chancel has an oak boarded semicircular roof and a three lancet east window which is a 19th century replacement for a 16th century mullioned window.

A pottery urn was found during reinforcement work to the tower foundations. It was originally thought to be a Roman funerary urn, but was later identified by the British Museum as a medieval food storage jar. It is now on display in the Lady Chapel.

There are sections of wall paintings either side of the east window, which also features carved stone heads thought to represent King Edward III and his wife Queen Philippa.
Sections of wall paintings and stone carved heads can also be found elsewhere in the church. The late 19th century Chancel Screen was created by the Mayfield School of Carving out of oak trunks salvaged from St Pancras when a gallery at the rear of the church was removed. The piscina in the chancel is most unusual. It has a canopy with castellations over three small ogee arches.