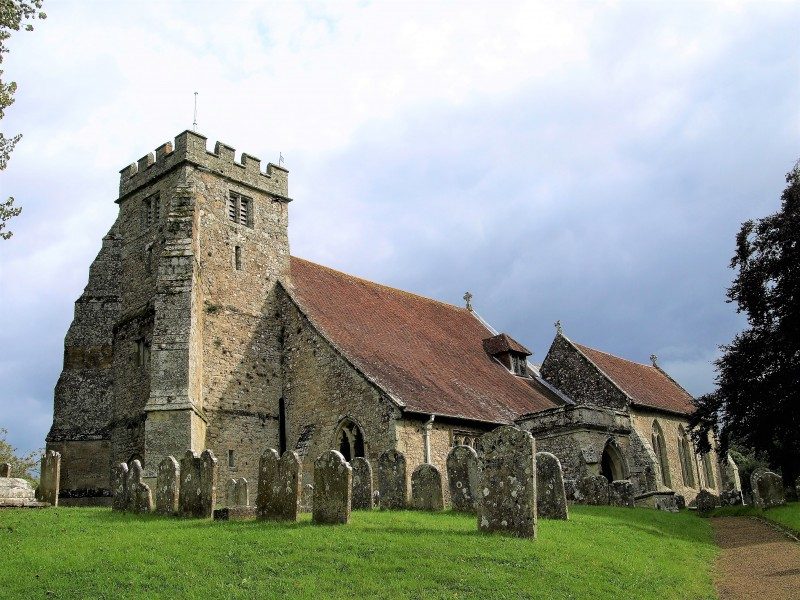 The Church of St George

The parish church of St George at Arreton was the Anglo-Saxon Minster church of the Isle of Wight, and still retains evidence of its Saxon origins in the 10th century west doorway and blocked window above. This west wall of the nave has been protected from the elements since the addition to the church of the tower in 1299.
The early Norman church consisted of a nave and chancel only. In 1160 a north aisle was added, followed in the 13th century by a south aisle, lengthening of the chancel, and the addition of a south chapel.
The first photograph in the gallery above shows the west end of the church. The Saxon door, and window above it, are blocked, and there are tall Early English lancet windows on either side.
The second photograph is of a late Saxon or early Norman window in the north wall of the chancel. There are remnants of wall paintings in the splayed window reveals, and the stained glass is of the Crucifixion.
Next shown is a view from the nave looking east towards the chancel arch which replaced the original Saxon/Norman arch in the late 13th century. Also showing in the photograph are parts of the 12th century north arcade and the 13th century south arcade.
The next photograph shows part of the east wall of the chancel. The reredos behind the altar was constructed of stone and polished marble in the 19th century. Shown is the left-hand (north) side, which has the 10 commandments set in trefoil-headed recesses with polished marble columnettes. The Creed and Lord’s Prayer are in matching recesses on the right-hand side.
Next is the square font with central stem and four corner shafts. It is a Victorian copy, in Purbeck marble, of a 12th century Norman type. The last photograph in this gallery is of the remains of the 13th century font which was discovered buried in the churchyard.
The second gallery starts with a photograph of a square opening to the south side of the chancel arch. This would have been the opening to the rood stairs before the Reformation, and now contains a sanctuary bell donated to the church in 1465.
Next is a view through the easternmost arch of the south arcade to the ‘Burma Star window’. One of the early 13th century clerestory quatrefoiled circle windows is showing above the arch. The stained glass in the three-light south window was installed in the late 20th century to commemorate the long association of the church with the Burma Star Association.
The next two photographs are of carvings set on the east wall of the north aisle. The first has been badly mutilated but appears to be a 13th century carving of Christ in Majesty. The second is the head of a serpent or dragon, and could date from the Saxon era.
Next shown is a Jacobean oak parish chest, marked with the date 1619 and the initials of the church wardens at the time.
Finally, is a photograph of a brick tomb to the west of the porch. This is the tomb of Oliver Cromwell’s grandson, William d.1720, and his wife Martha who lived nearby at Horringford.
.