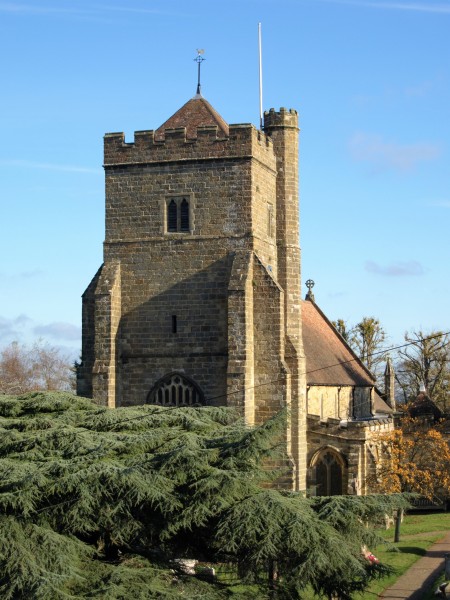 The main photograph is of St Mary’s taken from the wall-walk on the northern perimeter wall of Battle Abbey. The Abbey was built soon after the Conquest on the site of the 1066 Battle of Hastings, the Abbey church being completed c1094. The parish church of St Mary the Virgin was built c 1115 by the Benedictine monks of the Abbey to serve the new village outside of the Abbey grounds.
Little remains of this first building, save for the round-headed arch from the chancel to the south chapel, which was probably originally a tower, and perhaps some of the masonry at the south-west corner of the north chapel. The nave was built a little after the end of the Norman period, c1200, and the aisles were added later in that century. The chancel was also rebuilt in the 13th century, and the north chapel was added in the mid 14th century. The present west tower was built c1440.
The first and second pictures in the gallery show the nave and arcade arches to the north and south aisles. The arch piers alternate between square and round, this being quite a common feature of arcades built in the Early English period. The chancel arch was rebuilt in the 19th century, and the tower arch is contemporary with construction of the tower in the mid 15th century.
The third photograph is of the sanctuary section of the ‘weeping’ chancel, showing the beautiful 19th century carved oak reredos featuring six ‘Passion Shields’ relating to the Passion of Christ.
The six photographs in the gallery above show some of the fine stained glass at St Mary’s. The first shown is a 2-light window in the south aisle next to the entrance to the south chapel. Named the Senlac Memorial Window after stained glass was installed in 1984, it is in memory of the men of the English and Norman armies who died at the Battle of Hastings in 1066.
Next shown is the 4-light east window in the north chapel, with stained glass fitted in 1906, depicting Christ in Majesty. The third photograph is of another window in the north chapel. This 2-light window shows ‘The Light of the World’ on the left, and ‘The Good Shepherd’ on the right. The glass was installed in 1885.
The fourth photograph is of the main east window with stained glass, dating to 1893, depicting from left to right, St Martin, The Madonna and Child, St Benedict.
The last two pictures are of windows in the north wall of the north aisle. These contain pieces of 15th century glass.
The first picture in the final gallery shows the alabaster tomb of Sir Anthony Browne, (d1548) and his first wife Alice. The tomb is set between the chancel and the Lady Chapel (south chapel). Sir Anthony was granted the abbey by King Henry VIII after the Dissolution of the monasteries.
The next picture is of the 12th century font. Made from Purbeck marble, it is of a type common in Sussex. The square bowl is very large and is supported on a central column and four corner colonettes. There are arcades of (somewhat worn) Norman arches around the sides of the bowl. The 15th century font cover has been repainted and gilded.
The third photograph is of the pulpit which dates from the time of the Victorian restoration in 1869. It has open trefoil-headed arcades over a quatrefoil design, and there is foliage carving around the cornice.
The fourth and fifth photographs are of murals along the top of the north arcade wall around the clerestory windows. The paintings used to extend onto the chancel arch wall before it was rebuilt (evidenced by a sketch of 1845), and probably also along the length of the south arcade.
Arranged in two tiers, the surviving murals depict the life of the 4th century martyred saint, Margaret of Antioch. The paintings should be read along the top tier from right to left, and then back along the lower tier.
The final photograph is one of several oil paintings in St Mary’s, this one being of the Nativity.