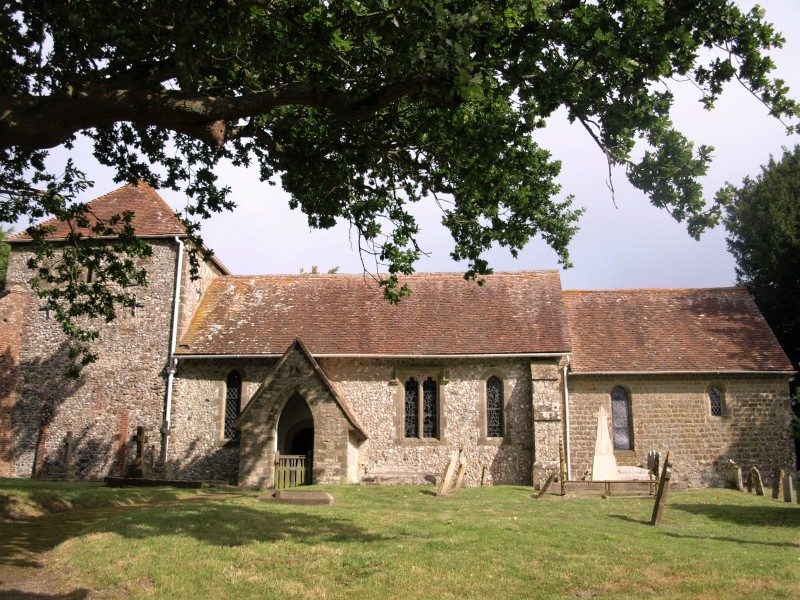 Between 1180 and 1185, at the end of the Norman era, construction of a church of flint and stone rubble was started with a tower on the site of a Saxon wooden church. The Saxon building had been recorded in the Domesday Book of 1086, and the Saxon ‘tub’ font still remains in the present church, albeit having been re-cut and furnished with a modern cover. Nave and chancel were added to the tower in the 13th century, and, unusually, were built the same width as the tower.
The south porch was added in the 19th century, as was a vestry, and extensive renovation works to the chancel were also undertaken by the Victorians, commencing c1878.
The gallery below shows some of St Mary’s windows. The first photograph is of the east window with stained glass depicting the Crucifixion. The window was glazed to commemorate one Edmund Sadler who died in 1857. The other two pictures are of windows in the south wall of the chancel. The smaller deeply splayed one is towards the east end, and has simple diamond leading. Below this is a 13th century trefoil headed piscina. The longer lancet window is glazed with a flower pattern, and has text taken from Isaiah 35:1, ‘The desert shall blossom as the rose’.

The Easter Sepulchre, shown in the gallery below, consists of a cinquefoiled arch inside a triangular label with finial, pierced trefoil, and crockets (the hook shaped projections on the label). There is an inscription along its base which commemorates one Rado de la Hedol. Nearby is Rado’s ancient tombstone, which bears a large sword or cross, and is a full 7 feet long. One can only surmise why a ‘giant’ with a Scandinavian name should be interred at Bepton, although the Norsemen were of course ancestors of the Normans.

The carved oak chancel screen was installed in 1912. It is surmounted by a large cross or rood.