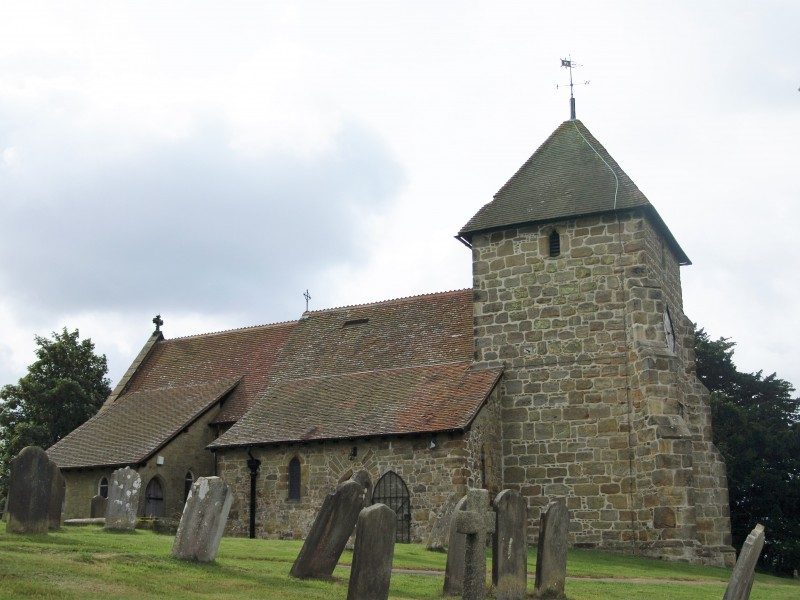 The Church of St Lawrence, Bidborough dates from the 10th century, part of the north wall of the chancel being Saxon masonry work. Also in this wall is the small round-headed Norman window shown in the gallery below. The second photograph in the gallery shows detached shafts and cushion capitals at the south doorway. These are also original 12th century Norman.The tall round arch is half blocked and now incorporates a late 14th century doorway with a hoodmould and a 15th/16th oak door with massive strap hinges and nail studs.  Just inside
the south doorway there is a niche which was presumably a holy water stoup. Formerly used by worshippers to dip their fingers in before making the sign of the cross, when entering the church. The niche is shown in the third photograph in the gallery.
The chancel dates from the 12th century, when the original small rectangular church was extended to include a north aisle and new chancel. That chancel was rebuilt in the 14th century and again in 1866-1867. The three light east window is  late Gothic Decorated in style. The late 14th/ early 15th century also saw the addition of the three stage west tower with pyramidal spire.
The second picture in the gallery below shows the west end of the church under the tower, with the most unusual clock pendulum which reaches right down to the height of the top of the west door. The two light square-headed 16th century west window, seen behind the swinging pendulum, is dedicated to the men of Bidborough who lost their lives in the Great War 1914-1918.
The font is ‘modern’, probably 19th century, but the octagonal bowl has a 17th century cover.

The medieval piscina, which is probably 14th century, was re-set in the east wall of the chancel when the latter was rebuilt in the 19th century.