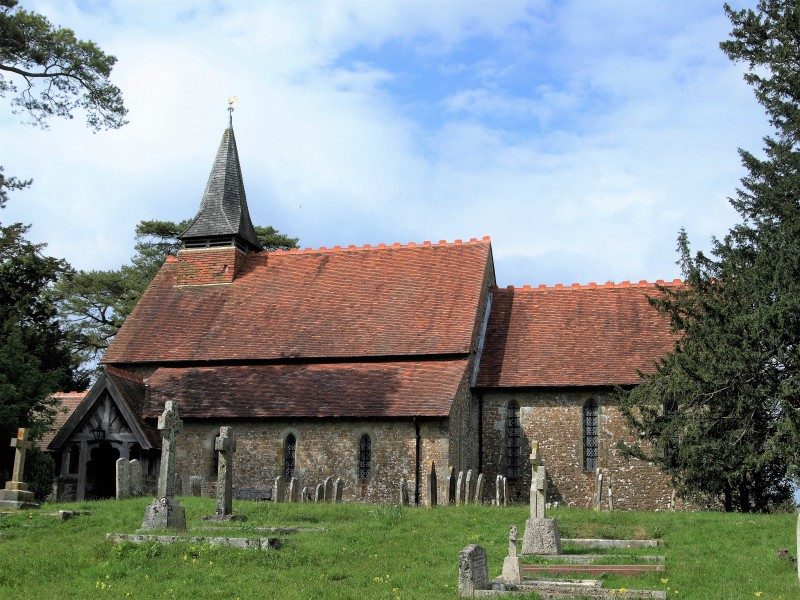 Church of the Holy Cross

The church at Bignor is recorded in the Domesday Book, and retains the original Norman chancel arch and Norman font. The remainder of the building was rebuilt in the 13th century, and  was restored by the Victorians in 1876-1878. Holy Cross consists of nave, chancel, north and south aisles, south porch and west bell turret with shingled spire.
The first picture in the gallery above is a view from the nave looking east towards the chancel, showing the Norman chancel arch and 14th century rood screen sitting comfortably with modern furnishings and fittings.
Next shown are the windows in the chancel east wall, consisting of three separate stepped lancets and a circular window in the gable. The stained glass in the lancets was installed in 1883 by Kempe. It depicts: in the left-hand window, top section, St Mary and in the lower section, the Annunciation; in the centre window, top, the Crucifixion, lower, the Nativity; in the right-hand window, top, St John, lower, the Annunciation of the birth to the shepherds.
The third photograph is of the lancet window in the chancel south wall. Also by Kempe, and installed in 1883, the stained glass is of St Catherine at the top, and St Agnes below.
The next photograph shows the chancel arch which has survived from the 11th century. The arch was used to delineate the separate areas of the church, the nave being for the congregation, and the chancel reserved for the clergy and choir. Next shown is the rare 14th century, carved oak, rood/chancel screen. Before the 16th century Reformation there would have been a large crucifix, known as the rood, above the screen.
The sixth picture is of an antique church chest which has three front panels carved with cinquefoil arches. There is a copy of the footprints (in the sand) poem standing on the chest.
Finally is a photograph of the oldest item in Holy Cross church, the 11th century plain circular font.