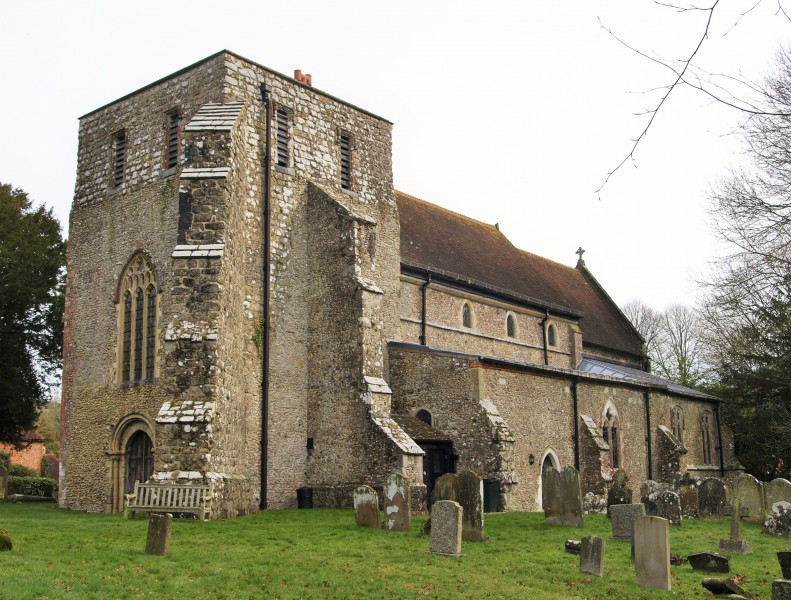 Ecclesiastical records confirm that a church at Bradeburna already existed by 1070 when Lanfranc became Archbishop of Canterbury. The church was rebuilt by the Normans c1144 with tall ‘Saxon like’ proportions, and much of this Norman work survives today.
The main feature image shows St Mary’s from the south-west. The large buttress on the south-west corner was constructed c1700 to support the Norman tower, the upper sections of which win danger of collapse and were taken down.
Pictures in the gallery above show two Norman doorways. The 12th century west doorway has a roll mould and hood to the semi-circular arch.
The priest’s doorway in the north wall of the chancel is only 2 feet wide, and has an unusual convex tympanum with a three-lobed pendant below a billet moulded outer order.
The third gallery picture shows the nave looking towards the chancel. The chancel arch is late Norman, and has nook shafts with Norman carving to the abaci and capitals. The arch itself is decorated with an outer billet mould over inner roll moulds.

The first picture in the gallery above shows a closer  view of the largely unaltered 12th century Norman chancel. The four light east window is, however, late Perpendicular Gothic.

The second photograph is of the Norman window at the eastern end of the north wall of the chancel. This window is unique in England, in that it has Norman glass in its original position in an unaltered 12th century window. The glass leadwork matches the Norman string course below the splayed window. The only other example of Norman glass in its known original position is at the Basilica of St Denis, near Paris.

The final photograph shows the most impressive medieval tower staircase. The stringers are halves of an oak, 31 feet long, and the treads are triangular, also hewn from oak with an adze.

Shown first in the gallery below is a tomb recess between the chancel and the south chapel with trefoil headed piscina to the left, and to the right, another historically important item at St Mary’s, one of only two heart shrines in Kent. Dating from c1300,  it  is made of Bethersden  marble, with an altar table incised with a cross within a circle, and a reredos with a plain relief shield inside cusped tracery. The memorial originaly contained the heart of either William de Valence (d.1296) or John Balliol, founder of Balliol College, Oxford, and father of John Baliol le Scot, King of Scotland.

The 14th century south chapel was rebuilt by Sir William Scott between 1420 and 1430 when it was re-named the Chapel of the Holy Trinity. It became known as the Scott Chapel  after Sir William’s death in 1433, the chapel being used for Scott family interments for generations of Sir William’s descendents.
The western part of the floor of the Scott Chapel is shown in the second photograph in the gallery. In the centre is a small coffin lid, presumably that of a child, dating from the 13th century. It is made from Bethersden marble and is carved with a fleury calvary cross, or cross-fleury (a cross with the its arms ending in fleur-de-lys).
There are four brasses in the chapel floor, all to Scott family members. They were moved there from the chancel in 1980. In order through the gallery they are; The brass to Sir William Scott (d. 1433)  shown in full armour,  with a greyhound at his feet, and a canopy above his head; Sir William’s wife, Lady Isabel Clifton, unusually depicted without any head-dress; The younger Sir William Scott who died in 1524. He was Lord Warden of the Cinque Ports, and Constable of Dover Castle; Dame Elizabeth Pownynges (d. 1528), who was the daughter of Comptroller of the Household to Edward IV, Sir John Scott.