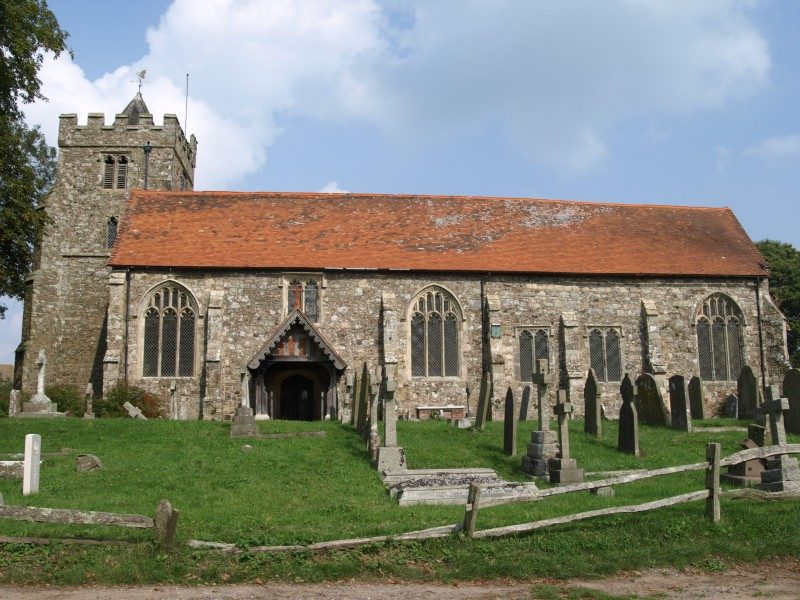 St George’s stands at the top of Brede Hill with lovely views south over the Brede valley from the churchyard. The church would have thus commanded this strategic position above the Brede river which was once navigable to the sea.
The oldest extant part of the church is the south arcade, which dates from the second half of the 12th century. A north aisle was added in the mid 13th century, any sign of a possible earlier nave therefore being removed, except perhaps for a small section of wall that is part of the south arcade.

The chancel is largely late 15th century, but the east window was altered and re-glazed in the mid 19th century.
The first picture in the gallery shows the south doorway to the south east (Oxenbridge) chapel. The depressed hood mould ends with moulded label stops, a wyvern on the left and an angel on the right.
The south east chapel was built in the 16th century by the Oxenbridge family, who had also left bequests in the late 15th century for works to the chancel.
An unusual item, at the abutment of the chapel east wall with the chancel roof, is a lead flashing which is engraved with the lead workers name, Anthony Griffin of Battel, and dated AD 1665.
The Oxenbridge family came to Brede early in the 14th century, since when generations of John de Oxenbridge descendents have resided at Forde and Brede Place. Their 16th century chapel at St George’s houses two splendid tomb monuments, shown in the gallery above. Brasses at the back of the Sir Robert Oxenbridge altar tomb were originally set in the floor. One brass, which is broken leaving only the feet and a leg, is to Sir Robert (1414 -1487). The other brass is to his wife Anne (d 1493).
The tomb of Sir Goddard Oxenbridge was erected in 1537, six years after his death. The effigy, in Caen stone, shows Sir Goddard in full armour, with his head resting on his helmet and his feet on a lion. Sir Goddard was said to be 7 feet tall and was referred to as ‘the Brede Giant’.
In later years, with Brede Place unoccupied, local smugglers used the property to hide their contraband.  To keep inquisitive young people away, the smugglers concocted a tale about a Brede giant who ate a child every night , and who could not be killed with metal, only with a wooden weapon. The story continues with local children leaving quantities of alcohol for the giant to find, and then killing him with a wooden saw while he lay drunk at Groaning Bridge, between the church and Brede Place. The red colouration in the water is not, of course, Goddard’s blood, but iron staining.
There is a wealth of interesting fittings and artefacts at St Georges. Two items which reflect the church dedication, are the stained glass and the wall cabinet figure both depicting St George in typical pose spearing the dragon. There is an interesting free-standing iron alms box, dated 1687, in the south aisle, used for collecting money for the poor or needy.
The fifth photograph in the gallery shows a finely carved, tall wooden figure of Madonna, dating from 1941, and the last photograph is of a carving added below the east capital of the arch  between chancel and Oxenbridge chapel in 1618. It shows a helmet and shield supported by two figures. The shield has the arms of Oxenbridge in one quarter.