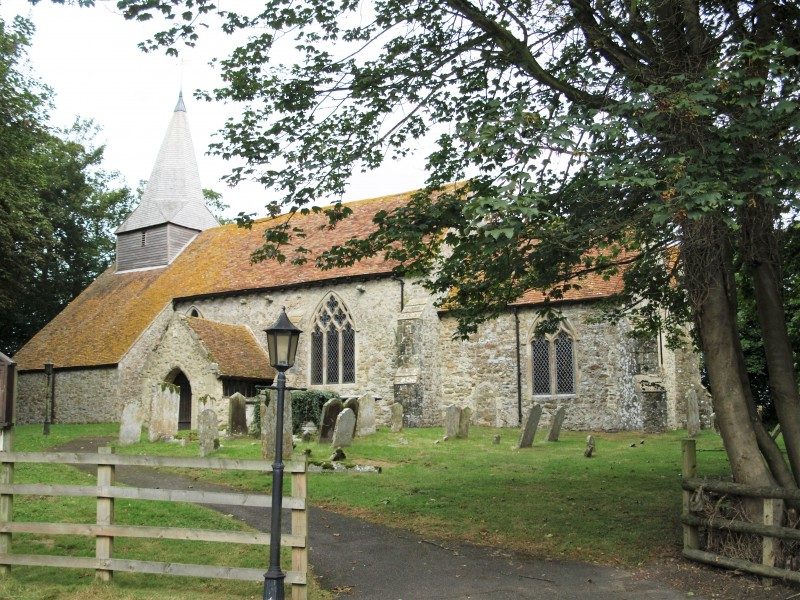 The present Brenzett church was built by the Normans in the late 11th or perhaps early 12th century on the site of a former Saxon building of which there is now no trace. The nave and chancel at St Eanswith’s are Norman, and typical herringbone masonry of the time can be seen under the window in the south chancel wall.
In the 13th century, c1220, a north aisle was added, and in the following century, a Lady Chapel was built at the east end of the north aisle.
Also in the fourteenth century a small south-west aisle (now the vestry) was added. The wood shingled spire was probably constructed in the 14th century, although this may not have been until the early 15th century.
The south porch was added in the 15th century. It is built of stone, with a plain tiled roof, and has unusual 9-light mullion frieze windows along each side.
The first picture in the gallery shows part of the south wall of the chancel. Below the 14th century two light ‘Decorated’ style window there is  Norman herringbone masonry. To the left of this is  a low, blocked, priest’s doorway with a ‘mass’ dial on the right-hand jamb.
The second photograph is of the chancel arch. There are two order, roll and  zig-zag mouldings on the uprights. These are Norman, presumably re-set when the chancel arch was rebuilt in 1902. The three light east window has stained glass, installed in 1874, depicting the Crucifixion.
Also shown above is a view of the nave looking towards the west end of the church. The weight of the spire above is taken by a framework of four  large braced timber corner posts with two intermediate  posts, the whole having been reconstructed in 1902.
Above, in the gallery, the first picture shows a grave slab in the nave floor. It is inscribed with the names of Anna Wentworth (d.1761), and John Wentworth who was vicar of Brenzett from 1738 until his death in 1770.
The second photograph shows the fine alabaster monument of the Fagge family, which dominates the Lady Chapel. The recumbent figures are of John Fagge Esq., who died in 1639, and his son and heir, also John, who died in 1646.
Finally shown is the octagonal font which dates from 1876 when St Eanswith’s underwent the second of four restorations. (1826, 1876, 1902, and 1984).
Note: St Eanswith’s is rather hidden away, and not on Church Lane. From the village, head towards Snave, pass Church Lane on the left, and very shortly turn left on a narrow lane up to the church. There are two keyholders close by.