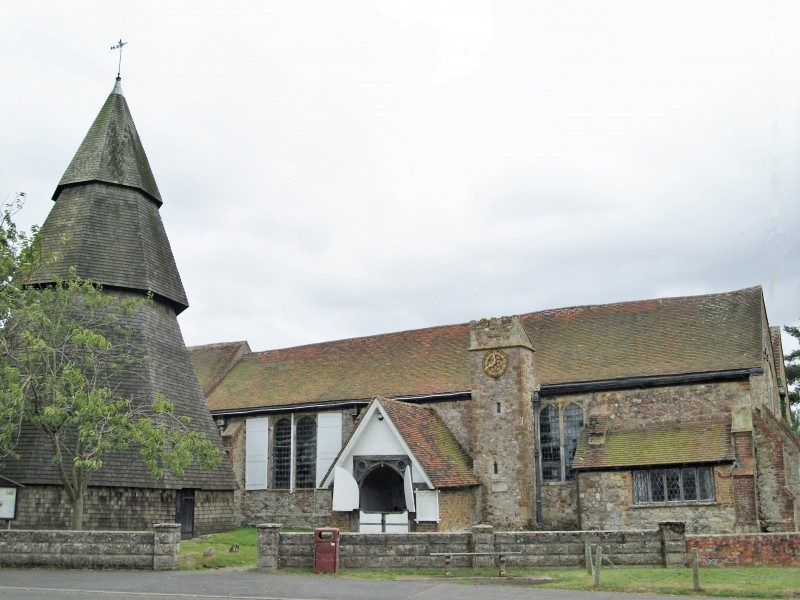 St Augustine’s at Brookland is a largely Early English church, having been built c1250. The nave, chancel, and south aisle are of this date, the north aisle being slightly later, perhaps early 14th century.
The font, of which more later, pre-dates the present church, being dated to c1200, and there are some pieces of worked Norman masonry displayed in the church, indicating that there was previously a Norman building here. Early records lead to conjecture that this was in fact originally a Saxon site.
The unusual north porch is also 14th century. The sides are brick built under a plain tiled roof. The front elevation has a white painted weatherboard gable with large carved spandrels over two pairs of 18th century white painted shutter doors.
There is no doubt, however, that the unique, stand apart, belfry is the most interesting and important feature of St Augustine’s. There are several different theories purporting to explain the reason for the wooden tower being separate from the main church building. The most convincing one being that the ground on the church site was just not stable enough to support the additional weight of a tower. Other tales are: that the tower was left on the ground having twice blown down; that the tower was moved to Brookland from Lydd; that the tower was originally an open structure housing a bell for flood warning; and that the tower blew off of the church in amazement at the marriage of a particularly aged and confirmed bachelor to a similarly elderly spinster!!
The first picture in the gallery above shows the 13th century nave with Georgian box pews which date to the time of the first restoration, c1738. Also in the photograph are 3 of the 5 crown posts in the nave roof, and the north and south arcades, which lean outwards at a worrying angle. The east end of the south arcade in particular looks in danger of collapse, being almost 1 foot out of vertical over its height. The second photograph shows another view of the south arcade, with the 18th century pulpit and tester in the left foreground.
Finally, in the gallery, the photograph shows the clock mechanism, and to the left, the door which leads to the north turret stairs. The clock was installed on the turret in 1955 ‘to commemorate the part played by the people of Brookland in the Second World War’.
Above, in the gallery, the first picture is also of the north-west corner of the church where there is a weights and measures display in a glass cabinet. The items on show are a complete set of weights and measures from the Hundred of Aloesbridge. They are marked with the date 1795, and include wooden corn measures (half a bushel, peck and gallon), an ell rod (approximately 18″, originally the length of a man’s arm from elbow to middle finger tip) for measuring cloth and the like, weights, scale beams and tripod.
The second photograph shows another gem at Brookland church. The circular lead font dates from the 12th century, and is of historical importance, being unique in England but similar to another in Normandy, France. It is quite likely that this font was made in northern France by Norman or Flemish craftsmen. Inscriptions on the font are in early French. Cable and zig-zag mouldings below the font rim are divided into 3 sections by small castings depicting the Resurrection. Below this are 2 arcaded rows with signs of the Zodiac in the upper arches, and Labours of the Month in the lower.
The third gallery picture is of a brass on the north wall of the chancel. It is in memory of Master Thomas Leddes d.1503. The brass was recovered from under the church floor during renovation work c1900.
The next photograph is of the chancel south wall with a double sedilia and attached piscina. All have pointed arches with roll and fillet moulding under an arched hoodmould.
The final two gallery photographs relate to the south aisle chapel. The south wall has a 13th century piscina which has five red ochre cinquefoil patterns on its back wall. Above this is an important historical wall painting dating from the second half of the 13th century. It depicts the martyrdom of St Thomas Becket of Canterbury. Details about the Brookland wall painting are provided on the information sheet on the south chapel wall.