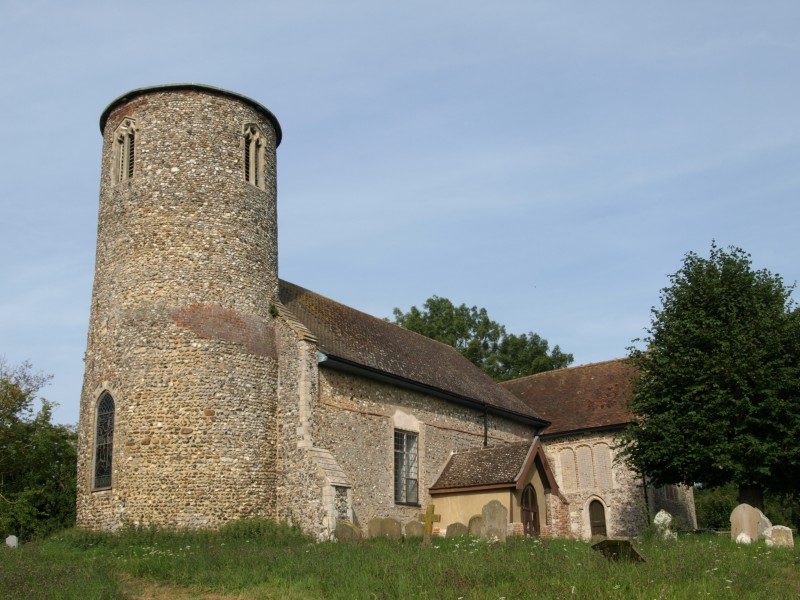 The Church of St Peter

This beautiful church, shown in the main image above, boasts a tapering round flint tower which has indications of being built before the Conquest. Close examination of the tower walls reveals that there were formerly two circular openings of Saxon type in the tower approximately 2.5 metres above ground level.
St Peter’s is one of some 38 Suffolk churches which have circular towers. There are only 185 surviving churches with round towers in England, nearly all in East Anglia (Norfolk 124, Suffolk 38, Essex 6), the others being 3 in Sussex, 2 in Cambridgeshire, and 2 in Berkshire.
The nave is Norman, there being a blocked Norman doorway in the north wall, and a south chapel was added in the early 16th century when nearby Bruisyard Hall was rebuilt. The south porch is also probably 16th century, although it has been much restored.
The first photograph in the gallery below is of the south elevation of St Peter’s, showing the buttressed tower with single west window and two of the three belfry openings in 14th century Decorated Gothic style. Also showing is the south porch, and part of the west wall of the south transept with bricked up triple west window above the 16th century private doorway to the (Hare) chapel.
The second photograph in the gallery shows the nave looking west to the Norman doorway into the tower, and the single light west window beyond. The stained glass in this window was installed in 1906 and depicts the Good Sheperd.
Next is a photograph in the nave looking the other way, east towards the chancel. Prominent is the Victorian rood beam which carries a large crucifix, and icons depicting St Francis and St Clare. The choir stalls have 15th century carved heads to the bench ends. The 3-light east window has stained glass depicting, in the centre, the Crucifixion, flanked on the left by St Mary, and on the right by St Peter with the keys to heaven. There is a copy of the Raphael painting of ‘Madonna della Sedelia’ on the north chancel wall, and next to this is a rare printed Decalogue with Moses, Aaron and Joshua behind the Commandments. There is a sedila and a piscia in the sanctuary south wall.
The fourth photograph shows the 15th century octagonal font which is of a type common in Suffolk, with the supporting column embellished with carved lions. The octagonal bowl has panels decorated with shields above carved angels.
The last two photographs are of wall paintings on the nave north wall. These are of uncertain date and content, and are the subject of further investigation.
Further reading:  Suffolk Churches