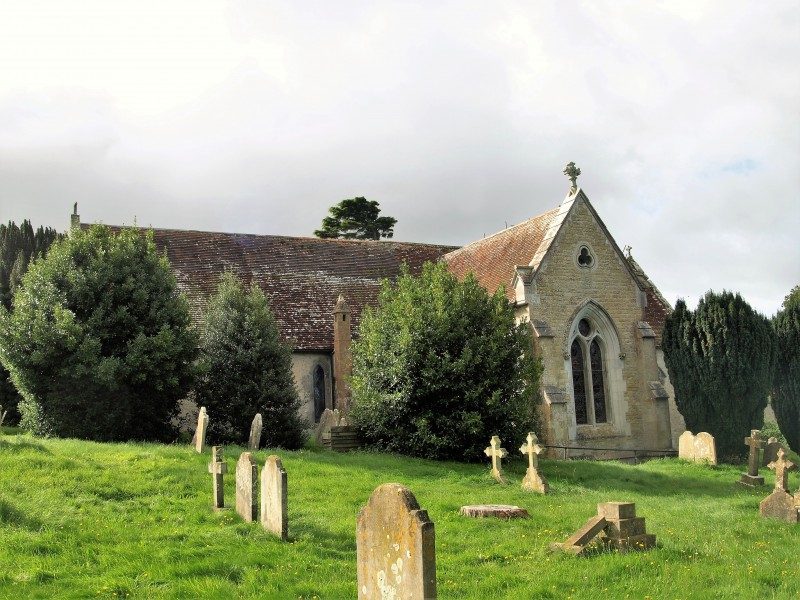 The main featured image above shows All Saints church from the north with the mid 19th century north or Barrington chapel in the foreground. It has a decorated style 2-light window and trefoil window over, and elaborate cross shaped saddlestone.
All Saints was built by the Normans and the church is recorded in the Domesday Book of 1086. The only apparent remains of this building, however, is some masonry in the west wall. Much of the rest of the church dates to the 13th century, including the north and south transepts, the chancel and the original tower which was built at the west end of the south aisle/transept. This tower was practically destroyed by a lightning strike and ensuing fire in 1683, and was not rebuilt until 1752. The west porch is 17th century, and the north porch and north chapel are 19th century.

The first photograph in the gallery below is of the 13th century pointed chancel arch with the chancel beyond. Extensive restoration by the Victorians was started in 1836, and included re-roofing, rebuilding the north chapel, porch, and the south arcade, and removal of a gallery. The organ, seen far left in the photograph, dates from 1873.
The next photograph shows a view in the opposite direction, along the nave. The 19th century arcade pillars, in Early English style, can be seen to the left.
The third photograph is a closer view of the chancel where the unusual east window is considered to be of architectural importance as it illustrates the development of window styles in the 13th century. The chancel window (there is a similar one in the south aisle) consists of two lancets with a trefoil light over all within a single pointed masonry arch. This shows the transition from individual lights pierced separately through the wall masonry, to combined lights separated by mullions in a single masonry opening.
The fourth photograph is of the font, originally dating from the 13th century, but altered in the 19th when the corners were cut off of a square font to form an octagonal one. Next shown is the pulpit which was also restored in the 19th century, and, with its polished marble columnettes, looks almost new.
Finally in this gallery is a photograph of the early 19th century reredos behind the altar. The carving depicts the traditional scene of the Last Supper.

The first photograph in the second gallery below shows the columns of the south arcade, and the other unusual 2-light window, this one having a quatrefoil top light instead of a trefoil light as in the main chancel. Below this window, on the wall, is a brass effigy of a knight which is shown in the next picture, and described on an adjoining plaque. The brass dates from the late 14th century, and would originally have been set on a table tomb. It commemorates one William Montacute/Montagu, son of the Earl of Salisbury. He was tragically killed accidentally by his father in a jousting event in 1379.
The fourth photograph shows the north/Barrington chapel which, along with the north porch, was built in 1842, replacing the 13th century north transept. The tall trefoliate headed panels to the side of the 2-light window, and to the side walls, are memorials to Barrington family members.
The last two photographs show the outer and inner north doorways which were rebuilt in neo Norman style with zig-zag and dogtooth mouldings in the 19th century.