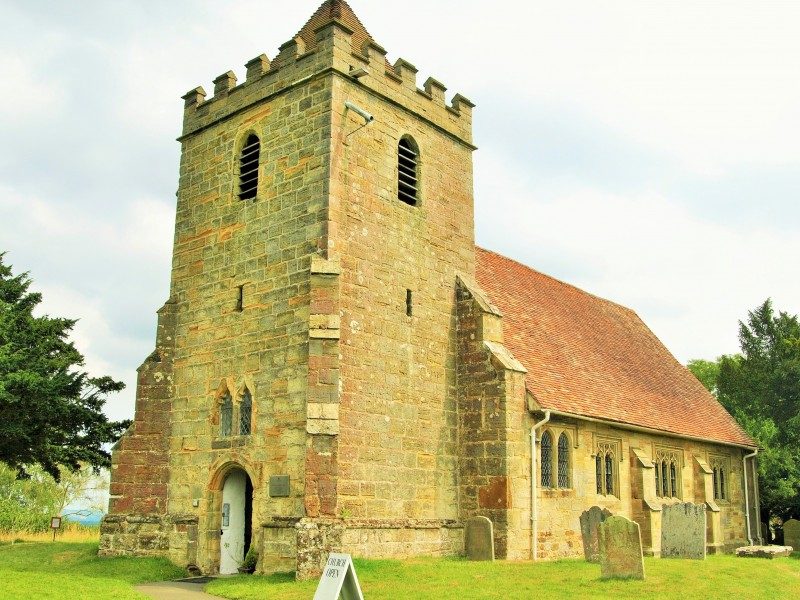 St Thomas à Becket was originally a chapel of ease serving the local people who lived some distance from the parish church of All Saints, Tudeley. (All Saints itself is on the site of a 7th century church, and retains some pre-conquest sandstone footings).
St Thomas à Becket church dates back to Norman times, the north nave wall being early 12th century, witnessed by the small splayed window.
It is said that Thomas à Becket (1118-1170) himself preached under the huge ancient yew tree in the churchyard.
The second photograph in te gallery shows the 14th century nave roof timbers. This is a typical crown post roof with the collars across the top end of the rafters supported by crown posts, themselves supported by huge tie beams across the width of the nave.
The third picture is of the font which is late 15th or early 16th century. It has an octagonal bowl on a circular stem. The unusual font cover is in the form of a small spire, and dates from the 17th century.
The upper half of a blocked Norman doorway in the north wall has zig-zag and ashlar decoration in the semi-circular head.
An extensive range of wall paintings at Capel church was first discovered in 1868 after having been obscured by later plastering for many years. Most of the murals are on the north wall of the nave and were uncovered in 1927. Two stages of decoration were noted and then preserved in 1970. The earliest painting dates to c1200 and consists of two horizontal friezes, the lower consisting of a zig-zag riband pattern, and the upper of a red band with scroll work. Also from this date are lines forming an imitation ashlar masonry pattern, and two consecration crosses, one in the Last Supper scene and a further very faint one to the left of the blocked north door.

The second stage of painting was carried out some 50 years after the first, c1250. The murals are arranged in two tiers, the upper one being largely obliterated and thus difficult to interpret. It formerly depicted scenes of the Death of the Virgin.

The lower tier, between the two friezes,  relates the story of Christ’s Passion. From left to right, the scenes start with Christ’s entry into  Jerusalem (shown in the gallery below, second picture). Christ is shown with a cruciform halo, cloaks are being laid in front of the procession, and the painting is framed with the city walls and towers. On the other side of the window is the scene of the Last Supper, (pictures 5 and 6)  albeit only six figures being visible, the others having been destroyed when the roof support was set into the wall. It is just possible to make out the feet of the other disciples below the roof timber. Also in this area is one of the consecration crosses which were marked into the plaster at the points where the bishop anointed the church. This would have been in the 12th or early 13th centuries.

Towards the east of the nave north wall is a scene of the Betrayal and Arrest (not shown here). Christ, embraced by Judas, is shown reaching down to heal the ear of the high priest’s servant, cut off by Peter in an attempt to stop the arrest of Jesus.
The Norman window with painted splays is shown in the third photograph.  On the left hand splay is a depiction of Cain killing his brother Abel with the jawbone of an ass. The right hand splay scene (photograph 4) is of God marking Cain’s forehead, making him an outcast.