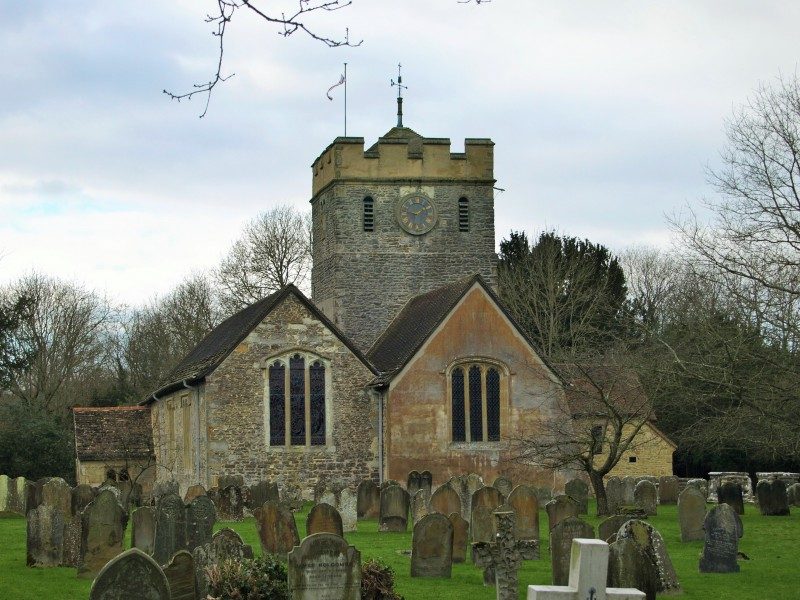 The main photograph is of the church of St Nicholas from the east, showing the former and current chancels.
Construction of the church at Charlwood was started in 1080, just 14 years after the Conquest. The early Norman building consisted of a nave, a tower and an apse. Parts of the north walls of the nave and the tower base still survive.
The de Gatwyck family extended  the church in 1280 by the addition of an aisle to the south of the Norman nave. A new chancel replaced the Norman apse c1330, and then in 1480 a chantry chapel was added to the east of the aisle, south of the chancel.
The tower was raised to its current height in the 17th century. Final changes in the 19th century saw the nave and chancel moved sideways into the south aisle and chapel respectively. The former chancel became a vestry, and housed the Victorian organ in the arch between the vestry and new chancel.
The first picture in the gallery above shows the south entrance doorway. Presumably contemporary with construction of the south aisle in the late 13th century, the doorway shows the transition from the Norman round arch to the Gothic pointed arch. The oak door itself is massive.
The beautiful reredos  behind the altar is shown in the second photograph. It was crafted in 1935. Also in the photograph is the 15th century east window with three trefoiled lights. The glass was installed in 1862, and depicts the Crucifixion.
The third photograph is of the chancel screen, which is also 15th century, and has a fine painted and gilded cornice.
The first picture in the gallery above shows the wall paintings on the south wall, dating to the time of construction of the south aisle in the late 13th century, They were discovered in the 19th century and are of national importance. A panel on the west wall, (shown in the second photograph), reproducing the murals, helps with interpretation of the images.
On the left of the window is a three tier sequence telling the story of the life of Margaret of Antioch. Immediately to the right of the window are two scenes. The upper one depicts the miraculous resuscitation by St Nicholas of three scholars who had been cut up and salted for meat. The butcher and his wife are shown on the left of the scene, the three scholars in the centre with the hand of God above, emerging from a cloud, and St Nicholas on the right .
Below the St Nicholas scene is one telling the medieval French story, written c1290, ‘Li trois mors et li trois vifs’. Three noble youths, out hunting in a forest are met by three hideous images of death, who lecture the youths on the vanity of human happiness and grandeur: ‘As you are, we were; as we are, you will be’. This is the only representation of this story which shows the three youths mounted.
Furthest right from the window is a later painting, dating from c1480. It was painted on limewash over the original murals, and depicted the martyrdom of St Edmund who was shot to death with dozens of arrows whilst tied to a tree. Subsequent cleaning off of the limewash removed the image of St Edmund leaving just the painting of the archer.
The final photograph is of a brass on the south wall of the chancel. Dating from 1553, the brass is to Nicholas Sander, with his wife Alys, 4 sons and 6 daughters.