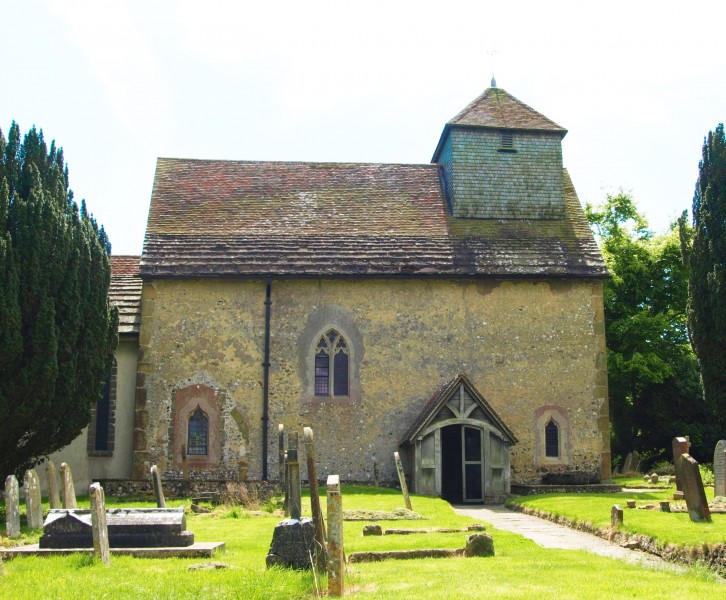 St John the Baptist church was recorded in the Domesday Survey of 1086, and there are distinct indications that the main fabric of the nave and chancel are pre-Conquest. The uncoursed flint walls are only 2ft 4in thick (Norman builders usually constructed much thicker walls than this) and there are sandstone ‘long and short’ quoins.

The chancel arch is an outstanding feature of the church, being perhaps some 950 years old. The massive semi-circular head and jambs have two heavy roll mouldings. The chancel arch is surrounded by wall paintings which are true frescos, having been painted on wet plaster. They date from the 11th century and are in two tiers separated by a scroll riband. Centrally above the chancel arch is the figure of Christ within a vesica shaped mandorla supported by kneeling angels, and then flanked by six apostles on each side. Below the riband are depictions of Christ giving the keys to St Peter, and the book to St Paul. The frescos continue along the nave walls, but are less clear there.

An elongated style 13th century lancet was uncovered in the south chancel wall during repair works. There is a similar window in the north wall of the chancel. They have been glazed with Victorian stained glass fleur de lis quarries. A 14th century style ogee-headed window in the south wall of the nave is probably actually 17th or 18th century. It was glazed in 1915 by Kempe & Co., with a crucifixion scene.

There is a well preserved memorial brass, on the south chancel wall, to rector John Idon who died in 1523. He is depicted wearing vestments for mass and is holding a chalice and communion wafer.

There are three bells at St John the Baptist, two being 15th century, and the third (actually No. 2 bell) is dated 1773. The old timber bell wheel is pictured below.