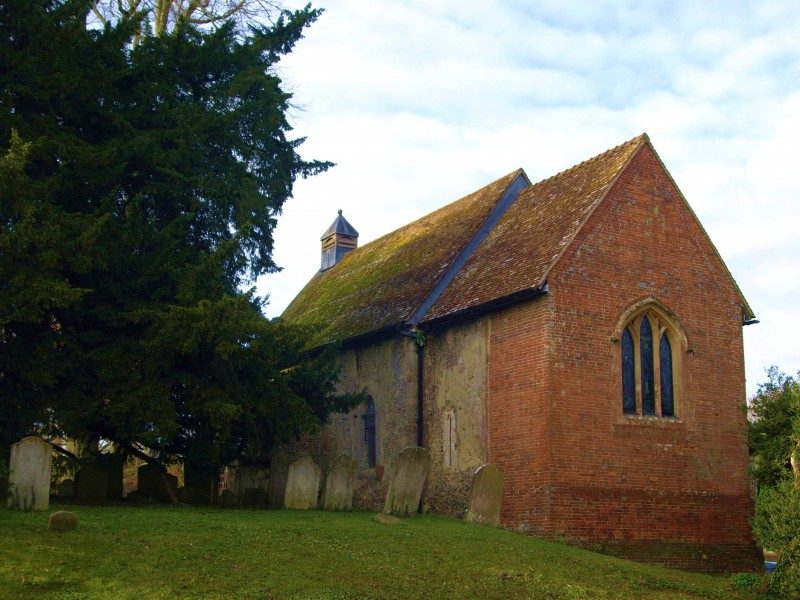 The church at Corhampton is unusual in that it has no dedication, being known simply as Corhampton Saxon Church. More unusual, though, is the amount of unaltered, extant Saxon work in the building.
Much evidence supports a build date in the first quarter of the 11th century, probably by 1020, during the reign of King Canute.
There are, however, two items that pre-date the Saxon church. In the churchyard there is a stone Roman coffin with lead lining. The coffin was moved to its current position in the churchyard in 1912 after having been discovered in a nearby field at Corhampton.
The other item which pre-dates the actual church is shown in the gallery below (first item). Built into the church wall to the right of the porch, but of a reddish brown stone not found elsewhere in the building, is an original Saxon sundial. Quite possibly dating back to the 7th century   when St Wilfrid was in the Meon valley on his mission to convert the southern Saxons to Christianity, the sundial is divided into 8 ‘tides’ rather than the 12 hours of modern sundials. The hole at the centre is where the gnomon, which cast the sun’s shadow, was fitted.
The featured image above shows Corhampton Saxon Church from the south-east showing part of the Corhampton ancient yew tree, which is estimated to be over 1200 years old. The incongruous red brickwork was undertaken when the east end of the church collapsed in 1842 as a result of road widening which undermined the church foundations.
The second photograph in the gallery shows the south and west walls of the church which display two typical Saxon architectural features, pilaster strips and long and short stone quoins. Pilaster strips are narrow low-relief vertical pillars, and can be seen at the centre of the west
wall and to the left of the porch. The corners of the west wall are of ‘long and short’ stone blocks brought up the River Meon from the Isle of Wight. The main wall structure between quoins and pilaster strips is of whole flints which were available locally on the South Downs.

The chancel arch is the finest example of a complete unaltered Saxon arch with accompanying pilaster strips. The typically simple construction has arch stones which run right through from nave to chancel, and plain capitals. The only work not from 1000 yearsago is a sympathetic repair to the north side.

The second gallery photograph is of the chancel north wall paintings, and the third photograph is of the south wall paintings. The new plaster, which limits the extent of the paintings, is the internal face of the red brick repair to the east end of the church. The paintings are thought to be mid 12th century.
At the top on the south wall, the painting depicts stories from the life of St Swithun, who was Bishop of Winchester 852-865 AD. Top left in the photograph St Swithun is painted performing the miracle of the eggs. Next to him, the eggs can be seen falling from a woman’s basket after she was jostled in the market crowd. St Swithun is said to have put the broken eggs back together. To the right of this are figures of two men carrying a stretcher. The head of the figure far right is missing where there is a plaster repair. This painting is thought to relate to the story of a young man who fell into the River Itchen at Winchester, after being frightened by two wild women. Although he was pronounced dead
when he was pulled from the river, he was restored to life after his body had lainby St Swithun’s tomb for three days. Below these stories is a border pattern coloured red and green, and below that are drapes and a large medallion featuring two doves back to back (addorsed) with their heads turned to face one another.
The paintings on the chancel north wall have not been deciphered, although there are similar drapes and a medallion with (probably) two lions couchant.