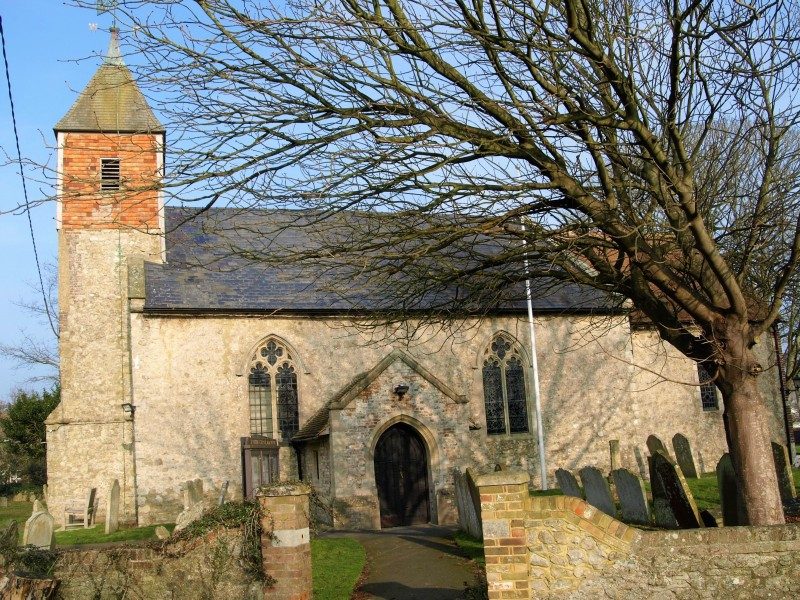 The Church of St Peter and St Paul was built in the mid 12th century when it consisted of a nave and chancel only. This Norman building survived unaltered for almost 700 years, save for fenestration changes and the addition of two large buttresses at the west end of the nave. These probably date from the 14th century when the soft marsh ground threatened the stability of the church.
Major changes were made in 1821 to cater for the expanding village of Dymchurch. The nave was extended to the north by some 14ft and a new queen post roof was constructed to span the wider building. A gallery was installed at the western end of the nave, and a two stage tower was built at the west end of the church using the 14th century buttresses as side walls. Probably also at this time, the east wall of the chancel was rebuilt.
In 1910, a semi-octagonal vestry was built to the north-east, and a new south porch replaced a former one of uncertain date.
The first photograph in the gallery below shows the fine Norman south doorway. There is a similar Norman doorway, now inside the west tower. The two side columns have cushion capitals, and the round arch has three orders, a plain inside one, then a large roll, and a chevron band to the outside, all springing from square abaci. The tympani were infilled with tiles in herringbone pattern, possibly in the 15th century.
The next photograph, taken from the west gallery, is of the chancel arch, which is also a fine example of Norman architecture. The west side of the arch is carved similarly to the south and west doorways with cushion capitals, square abaci, and roll and chevron orders. The eastern side of the chancel arch is plain.
The arch is slightly distorted where the south side has sunk, but this movement was arrested in 1910 by underpinning. The third photograph also shows the chancel arch, with the chancel south wall beyond, and, in the foreground, the font, lectern, pulpit, altar table, and two recesses in the nave south-east corner.
The first picture in the second gallery is of a 2-light window in the north aisle. The stained glass was installed in 2005 and is a modern interpretation of the keys of St Peter and the book of St Paul. The next photograph shows the late 13th century lancet window in the south wall of the chancel. The glass, dating from 1960, unusually features the Coat of Arms of the Diocese of Chichester and a Local Government Seal.
The third picture is of another 2-light north aisle window. The stained glass in this one dates from 1949 and depicts Christ in Majesty.
The fourth photograph in the gallery above shows the west end of the church of St Peter and St Paul. The gallery was built in 1821 and the organ was installed there in 1923. The photograph also shows the 1821 queen post roof to the nave. The chancel roof has common rafters and collars.
Next shown is a closer view of the south-east corner of the nave. The two recesses behind the pulpit are unusual and of uncertain use. It is probable that one or both housed a statue of a Saint.
The last photograph is of the font which dates from the 17th century or earlier. The circular bowl is supported on an octagonal column, on a roll moulding over a short circular band, all on a rectangular plinth.