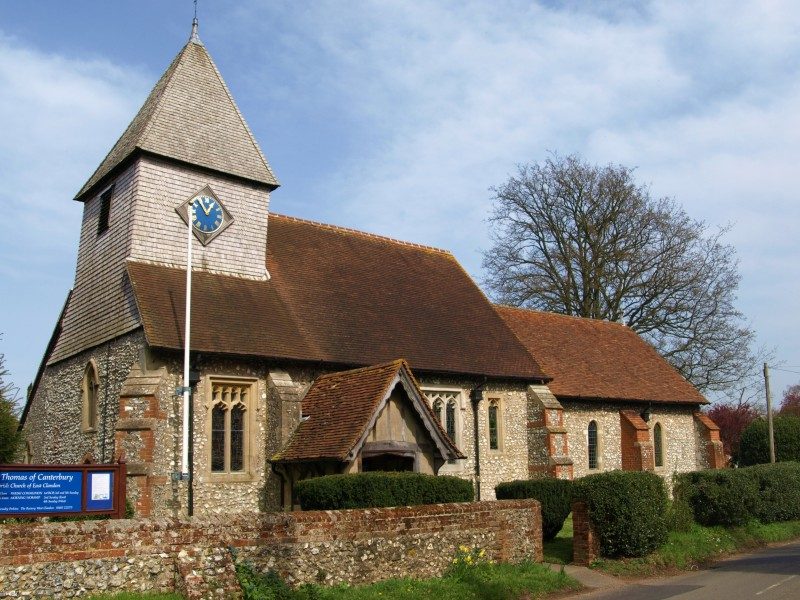 Church of St Thomas of Canterbury

This lovely little church retains much of its original 12th and 13th century construction. The nave, built of random flint rubble walls with stone and brick dressings, dates to c1110, whilst the chancel was added a little over 100 years later, c1220.
Although not on the Pilgrims Way, the route to Canterbury for pilgrims travelling to Becket’s shrine, this is the only church in Surrey dedicated to St Thomas of Canterbury.
The wooden bell tower is supported on posts from the west end of the nave floor, and dates from the late 15th century. It is clad with oak shingles, as is the four-sided spire above. The earliest of three bells in the tower, the treble , is pre-reformation. The clock on the south face of the tower was renewed in 1900, when extensive repair works were carried out to the church for the princely sum of  just under £2000.
Above in the gallery is the blocked doorway which is in the west wall of the nave at St Thomas’s. It is a fine example of a two order brick arch dating from the 16th century.
The second photograph is of the chancel east window which consists of  two splay sided lancets, and includes an external jamb stone dating from the late 12th or early 13th century. This window is unusual in that it has just two lancets, instead of the more common three.
The third picture is a view into the north aisle which was added in the 13th century. In the top right corner is the opening that was the access to the rood loft before its removal following the Reformation. The reverse side of the opening is shown below, with steps set into the width of the nave/aisle wall.
The second picture in the gallery above shows a chest tomb, set into a niche in the north chapel wall. It is modern (1913), but is a fine neo-gothic style monument. It is dedicated to Stuart, Lord Rendel of Hatchlands, and was installed by his nephew who renovated the whole north  aisle, recreating a chapel with its own altar, and a new ceiling depicting St Thomas à Becket surrounded by the four gospel writers, Matthew, Mark, Luke and John, and the patron saints of Great Britain.
The unusual stone font is 18th century, and the cover is mid 19th century.
The final photograph is of the highly polished brass lectern which is in the traditional shape of an eagle. The eagle represents a powerful enemy of the serpent, the devil’s symbol. The eagle is also the representation used for the gospel writer John and is therefore associated with spreading the biblical message.