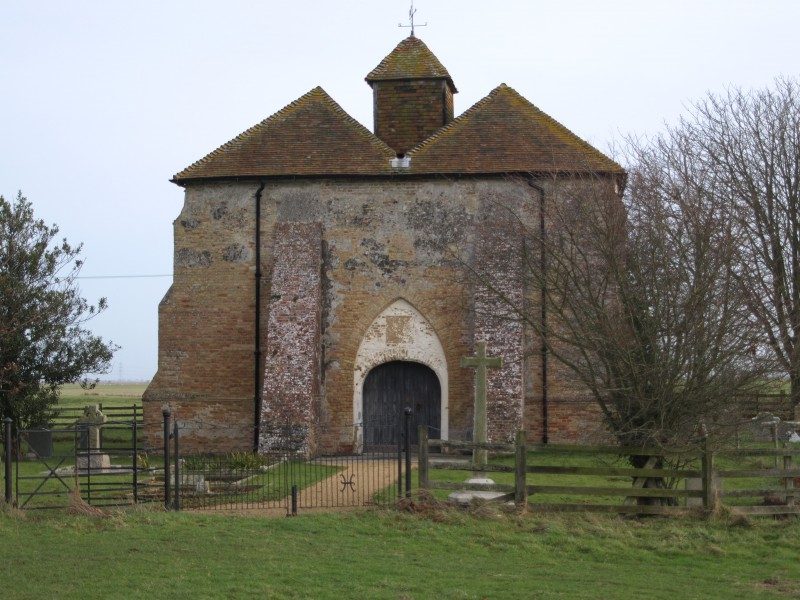 The main photograph shows the early 16th century brick built Church of St Mary from the west.
The church was built by Sir Richard Guldeford who, in 1499, obtained authorization (faculty) for this from the Diocese. St Mary’s was completed in 1505 and consecrated by the Bishop of Chichester.
The de Guildford/ de Guilford/ Guldeford family ancestry can be traced back in south Kent at least as far as Thomas de Guilford who was born in 1246. Sir Richard Guldeford was born c1450 in Cranbrook, Kent, and was a courtier to Henry VII. He became High Sheriff of Kent, Knight of the Garter, and Master of the Ordinance.
A stone carving of the family arms, mounted on the north wall of St Mary’s, is shown in the first photograph in the gallery below.
The second picture in the gallery above is a general view of the church which is simply one large chamber without aisles or division for a chancel. There are no internal columns or posts to support the roof which was remodelled in 1764 to form two hipped sections with a central valley and bellcote.
The third photograph is of a section of the north wall above the Guldeford arms where the plaster has been left off to expose some rather unclear markings which are possibly heraldry.
The first photograph in the second gallery shows part of the wall paintings at the top of the east wall and around the north and south return sections of the church. They depict angels with musical instruments and are thought to date from c1900. Below the paintings are two of four corbels which are contemporary with construction of the church.
The next picture is of the font which is much older than the church, dating from the late 12th century. The square bowl is of Purbeck marble and is carved with arcading and rosettes. The supporting brickwork is modern, possibly surrounding an older central pedestal. There were formerly corner shafts, perhaps damaged along with the original central support.
The third photograph shows one of three painted boards on the west wall. This one is the Apostles Creed, the others being the Lord’s Prayer, and the Ten Commandments.
The fourth photograph shows the clapper of the ancient bell brought to St Mary’s from nearby Playden Church in the 19th century. The bell itself was taken down from the bellcote in 1932 after it became too worn and cracked to be safely rung. After storage in the church for some 68 years it was bought by Rye Rotary Club in 2000 to mark their 50th anniversary. It is now mounted in Watchbell Street, Rye, where it is used to illustrate the type of bell used in the 13th and 14th centuries to warn of attacks by the French.
The final photograph shows the two-decker pulpit and low box pews which probably date from the early 19th century.