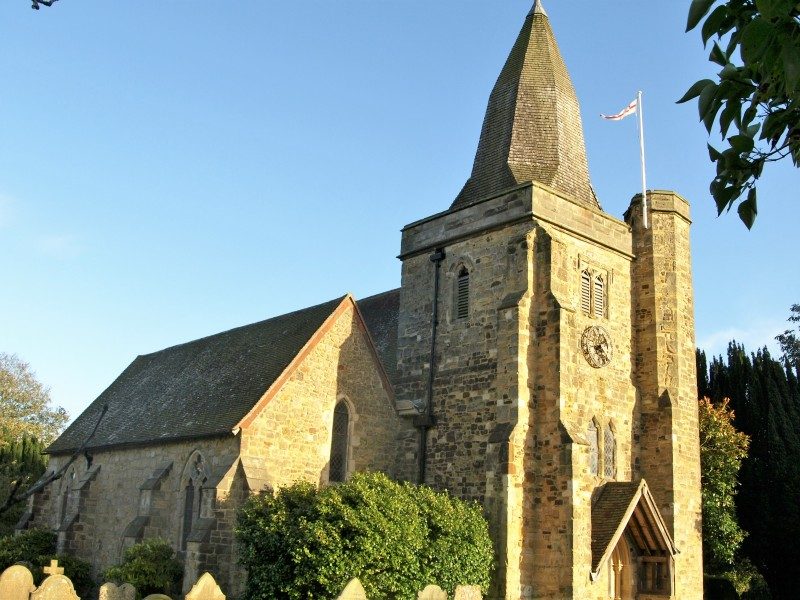 Church of St James the Great

St James the Great, Ewhurst Green, was built largely of local Weald sandstone giving the building its natural warm appearance. Much of the structure is 14th century, although ironstone in the lower portion of the tower dates this part to the 12th century. The west doorway is also 12th century, the semi-circular inner arch being typical of Romanesque/ Norman architecture, whilst the pointed outer arch is characteristic of Early English Gothic. This transition in architectural styles took place during the late 12th century.
The chancel at St James has a waggon roof (wagon-vault), and is skewed out of line with the nave, a feature which occurs fairly often in medieval churches and is commonly thought to simulate the head of Christ falling to one side on the Cross.
The three light east window is in the early Perpendicular style of the late 14th or early 15th century. The stained glass was installed in the 1860s and depicts the Crucifixion.
The church is nowadays entered by the south door, leading immediately to the narrow south aisle which, nonetheless, contains some of the most interesting features in the church, two of which are shown in the gallery above. At the east end of the south aisle is the Lady Chapel which has a fine picture of the Mother of God, painted by a Bavarian artist in 1840. Close by, on the south wall is a piscina (used for washing communion vessels), with a trefoil head.
The third picture is of the font, which is just to the left as you enter the church. It is made of Sussex/Petworth marble and dates from the late twelfth or early thirteenth century.

Shown above in the gallery is a carved arch corbel depicting a rather ugly head held between a pair of folded arms. Below the corbel is a brass which is shown in a closer view in the second photograph. The brass commemorates the death on 6th February 1520 of William Crysford, one of a local landowning family and distant ancestor of the webmaster.
The third picture is of beautiful stained glass in one of two clerestory windows in the nave south wall. The glass was designed by Margery May, a local artist, and was installed in 1971. The window shown depicts a chalice, whilst the other is of a cross.