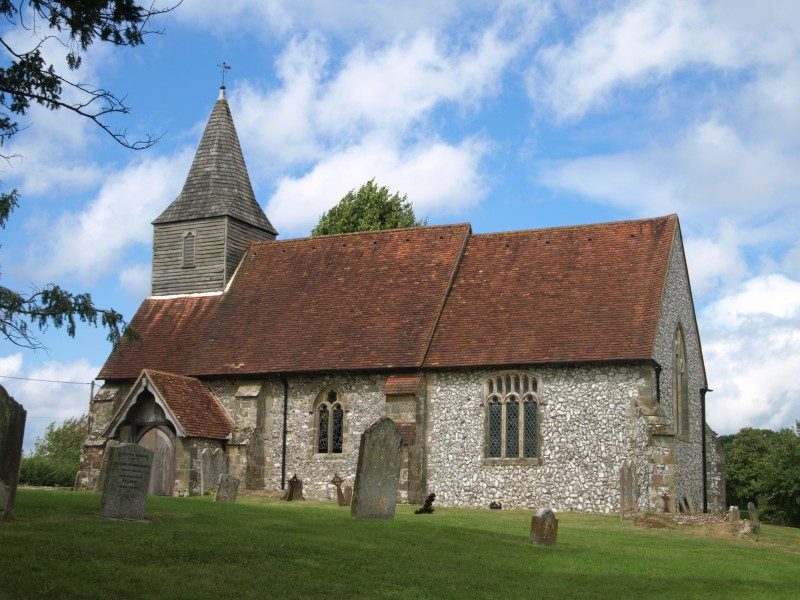 This little flint built church dates from the 13th century, although there is documentary evidence of an earlier building in the form of confirmation of a charter in the early 12th century granting the chapel at Hescheta to the priory of St Pancras, Lewes. Possible remnants of the earlier Norman church are the font and part of a piscina found in the south wall below the two light WW1 memorial window  in 1972.
However, also in 1972, an early 13th century potters kiln was discovered at the west end of the church. The kiln would have surely pre-dated the church indicating that the latter dates from no earlier than the mid-13th century.
Given the position of the piscina, which is normally to the right of an altar, which in turn stands near to the east wall, it is probable that the Norman building extended only as far as the present chancel arch.
The present church consists of a nave, north aisle, chancel and north vestry. There is a weatherboarded bell-turret with shingled broached spire. The south and west walls of the nave, and the north arcade are original 13th century, whilst the remainder of the church was rebuilt by the Victorians in 1885.
Pictures in the gallery above show the nave and chancel arch, the west end of the church, and the 13th century north arcade.

Shown in the first picture in the gallery above is the font, which dates from the 12th century, but has since been altered at least twice. In the 13th century the tub was supported on a central column and four corner shafts. These are now missing and the font sits on a later stone plinth. The font cover is probably 17th century.

The second photograph is of the war memorial window. The left hand of two lights shows a soldier and a sailor, and the right hand light depicts Christ blessing.
The final photograph is of a north lancet with leaded light glazing incorporating irregular-shaped ‘quarries’ with leaves.