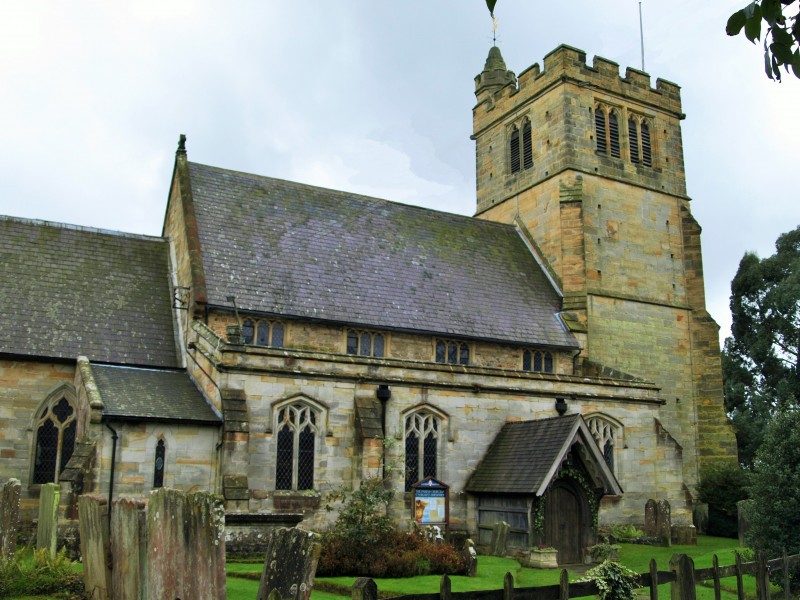 Building of the present church at Horsmonden was started c1260, on the site of a former Norman building which dated back to about 1100. The list of rectors in the church starts from 1293, but it was one Henry de Grofhurst, rector from 1311 until his death in 1361, who was really responsible for the building of St Margaret’s.
The tower was built of local weald sandstone in the late 14th century. It reaches a height of 70 feet from ground level to the top of the parapet wall battlements. The bell chamber and tower roof  are accessed by a semi-octagonal, 92 step, stair turret on the south east corner of the tower.

The nave and chancel are shown in the first photograph of the gallery, looking towards the east window, which, along with the west window, was re-glazed in the mid 20th century with some beautifully colourful stained glass.
The brass ‘spider’ chandelier dates from 1703, when it was presented by the Reverend Stephen Bate.

An unusual feature of the Church of St Margaret, Horsmonden is the evidence in the south wall of the former existence of two rood staircases. Medieval churches normally had just one rood screen, an ornate partition of open tracery surmounted by a rood loft with a sculpture of the Crucifixion (rood was the Saxon word for ‘cross’). The rood screen was typically sited between the nave and chancel, where it formed a visual separation between the clergy and the laity. At the time of the Reformation, rood screens were removed and destroyed under injunctions of Edward VI in 1547. Some were restored during the reign of the catholic Queen Mary, but were removed again under Elizabeth I, and there are no medieval examples remaining in England.
The second photograph shows one of the sets of stairs to a rood loft at St Margaret’s. The other stairs, to the east, were blocked up, probably because of subsidence in the chancel arch pier. Rood stairs gave access to the rood loft for lighting candles to illuminate the Rood.

The font is thought to be a 17th century copy of a previous 15th century one. It has an octagonal bowl with shield and rose emblems.

Shown above in the gallery is the exceptional Grofhurst Brass, which is set into the chancel floor in front of the altar step. This important memorial is to rector Henry de Grofhurst mentioned above as the builder of St Margarets. The brass was made during Henry’s lifetime c1338, and shows him in full robes with a lion by his feet. He is standing under a pedimented canopy, and is holding a lettered scroll.
The memorial shown in the second photograph is to one of the Smith-Marriotts, whose family held the incumbency at St Margaret’s for over 150 years in the 18th and 19th centuries.