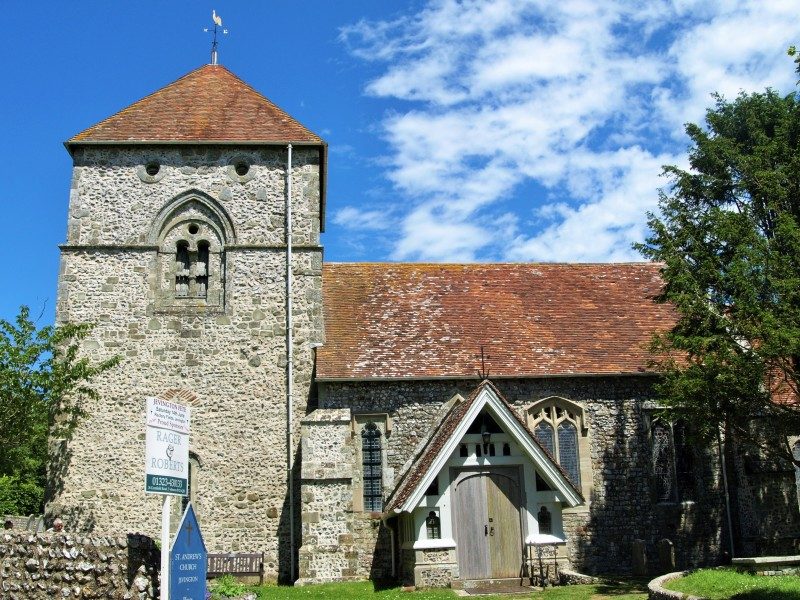 St Andrews, Jevington is built from local flint interspersed with green sandstone, and has clear evidence of  its Saxon origin. The oldest part of the church is the tower which dates from some 150 years before the Conquest, c900 -950 AD.  At that time the church served the secondary purpose of a refuge for local people when their land and villages were subject to Viking raids. St Andrews tower is a typical example of a defensive tower of the time.

The ‘long and short’ quoins of green sandstone, the sections of herringbone flintwork and the reused Roman bricks in the arched heads of the remains of the original north and south windows of the tower, are all good examples of Saxon construction.  Set below the pyramidal spire, and with its arches level with the tower string course, the double bell opening is an interesting combination of styles. The opening has been altered and restored at various times with the outer arch being changed, at the time of restoration in the 19th century, to pointed, giving a late 12th century appearance.

The south porch dates from c1873, but does blend well with the building. Next to the porch the south buttress at the west end of the nave shows long and short work which has been incorporated to match earlier Saxon work.

Originally the tower at St Andrew’s would have been used as a nave, probably with a small apsidal chancel to the east. The present nave dates from the late 12th century and the chancel from early the next century. The pointed chancel arch itself dates from c1200, but is not quite symmetrical suggesting it could have been rebuilt  from an earlier Norman arch.

Of most interest in the church is a Saxon sculpture, which was set on the north wall of the nave after being discovered in 1785 under the tower floor. The 3 feet high carving depicting Christ dates from c950 AD and shows Him holding a long sword or cross with two beasts under His feet. The scene could simply be a depiction of good triumphing over evil, or may be an interpretation of Psalm 91 (‘thou shalt tread upon the lion and the adder’). The intertwining of the two animals is typical of the Scandinavian ‘Urnes’ style of decoration, linking the sculpture to the Vikings.

The font has a lead lined square bowl on a green sandstone base. The style, with shafts on the four corners of the base, is similar to others in the
area. It dates from the late 14th century, although the bowl could be some 100 years earlier, and shows signs of fixing points for a lock and hinges. (All fonts were required to be locked under a 13th century canon law to prevent theft of Holy Water).
.

Tapsell Gates are unique to Sussex, there being only six in existence, all at churches within a 10 mile radius of Lewes:- St Mary the Virgin, Friston, St Andrew’s, Jevington, St Pancras, Kingston near Lewes, Coombes Church, Coombes, nr Lancing, The Church of the Transfiguration, Pyecombe, and St Simon and St Jude, East Dene.

The design of the gate was the brainchild of one John Tapsel, from an old Sussex bell-founding and rope-making family. John lived at Mountfield, near Battle in the early 18th century, and his design was first recorded in 1729 when the churchwarden’s accounts at St Pancras Church show that 1s. 6d. was paid for the new church gate. The simple but ingenious Tapsel gate is basically a wooden five bar gate hinged on a central pivot post. When opened it  lies in line with the entrance path to the church allowing pallbearers either side of the gate to carry a coffin easily through the entrance. The top bar of the gate also came in useful to take the weight of the coffin whilst the pallbearers waited for mourners. With its weight being removed from one hinged end, a Tapsel gate has the additional advantage of being easy to open in either direction with little effort.

One thought on “Jevington Church”