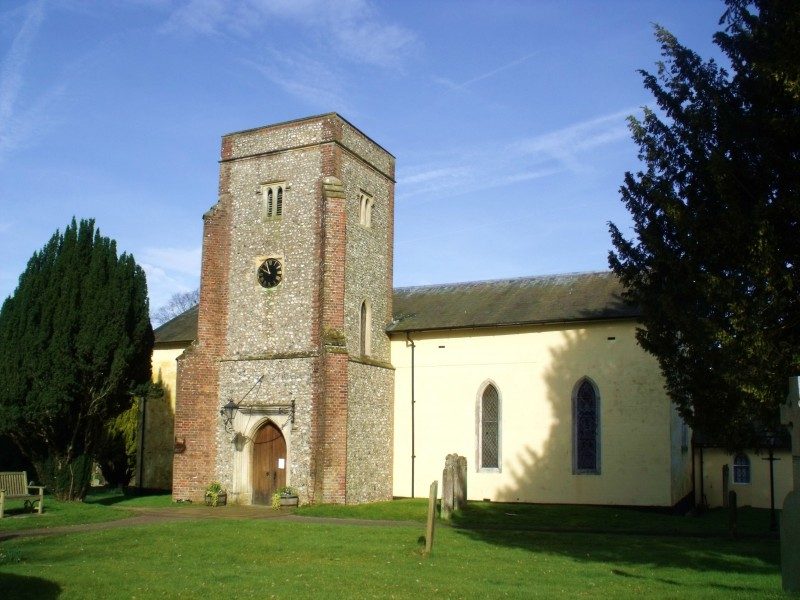 Various architectural elements of the church of St Katherine, Knockholt indicate that the building dates from the 12th century, despite a document of c1350 by a Canterbury monk stating that it was built in 1281.
Indications of a 12th century origin are the combined nave and chancel with no chancel arch, and the massively formed tower, apparently without a door. Early paintings of the church also show that it previously had small 12th century windows in the south wall, and two more in the west wall which were possibly from the same time.
The east wall, pictured in the gallery below, shows two tall narrow windows in deep splays flanking the three main lancets. These deeply splayed windows are typically Norman early 12th century, as are the two large plain blind arches below them.
All of this is apparently contradicted by documentary evidence found in a library next to Reigate church. This can be summarised by the following timeline:
9th May 1281 Knockholt church is consecrated under license from Canterbury.
c1350 Canterbury monk Stephen Birchington compiles documents including one relating to the foundation of Knockholt church.
7th June 1701 Will Jordan donates the documents to Reigate public library.
1849 The documents were ‘discovered’ in the library by Albert Way.
1852  The Rev. Arthur Hussey includes the documents in his book ‘Notes on the churches of Kent, Sussex and Surrey’. The reverend included the original Latin and an English translation.
Although the documents tell us that one Ralph Scot built the church in 1281, they also refer to the site already being used for festivals, so it is perhaps logical to surmise that a Norman building existed there before 1281, and that Scot rebuilt or extended it prior to having it dedicated to St Katherine.
The second picture in the gallery shows the west end of St Katherine’s.  The organ, which was built in 1934, has been fully restored. Unusually, the instrument is split, with a chest of pipes on either side of the church.
The font is 19th century, and is shown decorated at Christmas time.
The story of St Katharine of Alexandria, to whom the church is dedicated, is told by framed document on the nave wall:-
St Katherine of Alexandria was a Christian virgin of the fourth century who repulsed the dishonourable love of the Emperor Maxentius, and was by him condemned to death.
A wheel set with razors was to have been the instrument of her martyrdom, but when she was placed on it, it broke, and the bystanders were wounded by the flying razors.
She was then beheaded and her body was said to have been carried to the top of Mount Sinai. In consequence most churches dedicated to St Katharine are, like this one, on high ground.
She is said to have once refuted the arguments of fifty pagan philosophers and, as a result, is sometimes regarded as the patroness of Philosophy.
Because of a vision she had of her mystical marriage with a heavenly bride-groom, she is thought of in France as the guardian of unmarried women.
Her feast is celebrated on November 25th .