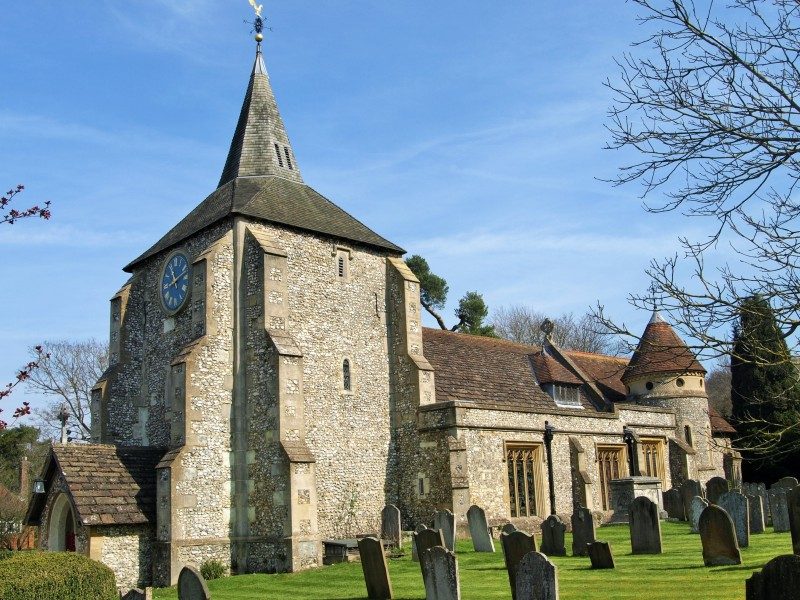 This church is in a lovely village setting below the National Trust’s Box Hill beauty spot in the Surrey hills.
The squat tower is finished  with a broach¹ spire with louvre vents and a traditional cockerel² weather vane. The tower is Norman, but incorporates some 10th century work in the west wall. The west door is tall and narrow with chalk quoins, and dates from c950.
The first photograph in the  gallery below is of the late 12th century Norman nave, and ‘weeping’ chancel which dates from c1180. The chancel arch is Norman with double chevron bead and dog tooth moulding. It was raised to its present height during extensive Victorian renovations and additions in 1872. The chancel east window was also replaced at that time, but the chancel north and south lancet windows are original 12th century.
The second picture in the gallery above is a view of the Norbury Chapel from the north aisle. The chapel dates from c1300, and retains some chequered flint and stone walls. A section of this can be seen above the arch which was inserted in the chapel external wall when the north aisle was added in 1872.  The third photograph shows an ornamented stone tomb in the chapel with brasses above. The inscription  confirms that the tomb is of Wyllyam Wyddowsoun and his wife, and dates to 1514.
The first picture in the gallery above shows the ashlar reredos behind the altar. It is a depiction of the ‘Last Supper’, and was installed in 1938 for Lucie Widenham-Fosbery as a memorial to her mother.
The second gallery photograph is of the Norman font. The square basin is cut from a single stone and is supported on four colonettes and a central column, all on a stone plinth. The basin has tapered sides which are decorated with blind arcading.
Finally shown is the pulpit which was brought from Belgium in 1840 and is a fine example of the quality Flemish craftsmanship at the time.
¹ A broach spire is usually octagonal, and is built with triangular faces, each called a broach, on top of a square tower.
² In the 9th century, a papal edict declared that every church in Christendom must be adorned with a cockerel as a reminder of Peter’s betrayal of Christ, when He said “ I tell thee, Peter, the cock shall not crow this day, before that thou shalt thrice deny that thou knowest me.”