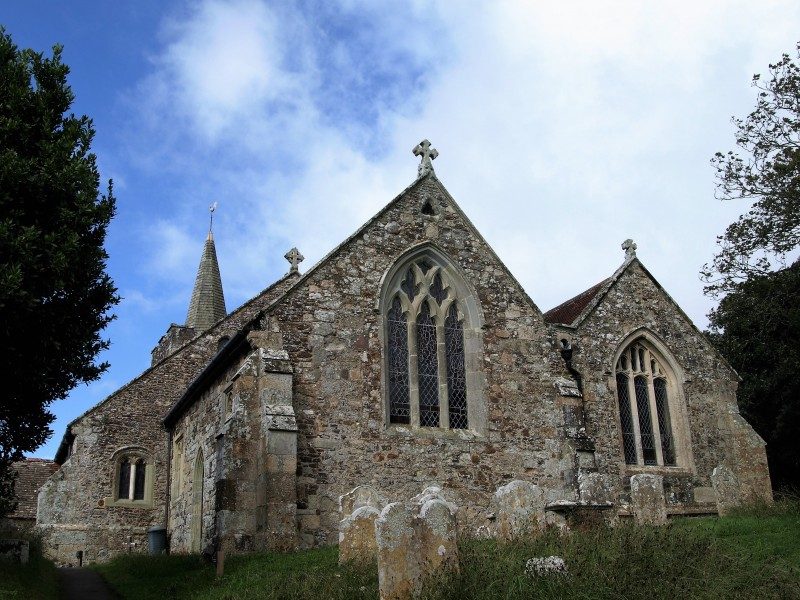 The church of St Peter & St Paul at Mottistone stands directly across the road from the National Trust’s Mottistone Manor Gardens. It was built in the 12th century by the then lord of Mottistone Manor, Brian de  Insula. Little remains of that early church as the building was extensively enlarged and restored in the 15th century. The north and south aisles, the chancel, and the west tower are of this date. A north (Cheke) chapel was added during the following century, and a south porch in the 19th century.
In 1863, the Victorians undertook a general restoration.

The first photograph in the gallery below shows the nave and chancel. The 15th century chancel arch is built on 12th century foundations, and the central column of the north arcade also has a 12th century base. One of the chancel tie beams bears the date 1628, indicating that the chancel was re-roofed at that time. The chancel roof was boarded internally in the 19th century using timbers salvaged from the wreck of the ‘Cedrine’, a convict ship that went aground off the Isle of Wight coast in April, 1862. The story of the wreck is related in an exhibition area in the church.

The second photograph is of the font, originally 12th century but restored in the 19th century. Next shown is the oak Jacobean pulpit carved with a triple floral design at the top, over a larger circular motif in the middle, and a diamond shape at the bottom.

The fourth photograph is of the Dillington tomb. Set under the arch between the Cheke chapel and the chancel, it is a memorial to Jane Dillington (d.1674), who held the Mottistone estate from 1621 after it was purchased from the Cheke family.

The next picture shows a 2-light window in the south aisle with stained glass depicting St Peter and St Paul, to whom the church is dedicated.