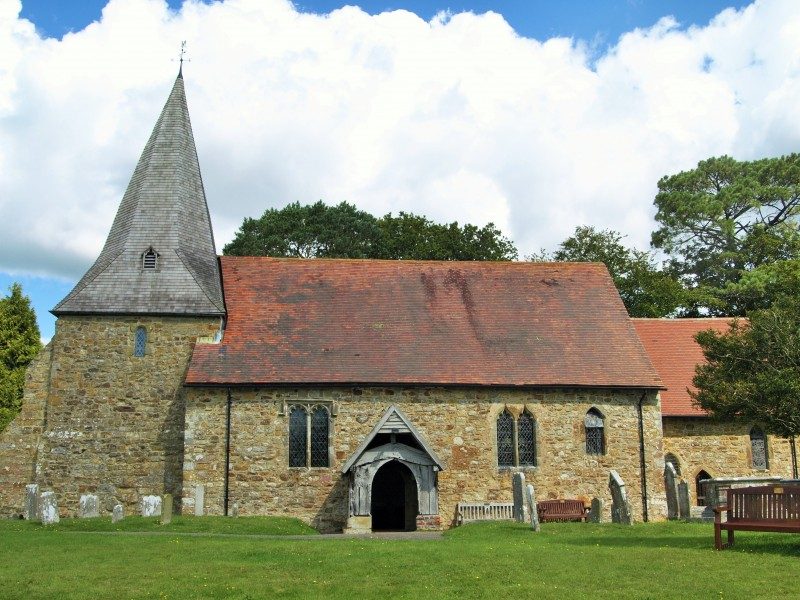 The parish church of All Saints, Mountfield is a Norman building which dates to the early 12th century. The nave and chancel are unaltered in size, and no aisles or chapel have been added. The tower was added at the end of the 12th century, and the south porch in the 14th century. There is a ‘modern’ vestry to the north of the chancel. Other alterations are limited to 13th century hagioscopes (squints) either side of the chancel arch, the common 14th and 15th century fenestration changes, and, in 1840, a new west gallery for the organ.

The priest’s doorway, in the south wall of the chancel, is shown in the gallery above This allowed the priest to enter the chancel without passing through the congregation. The date of this one is unknown, but would have been before the Reformation, probably 14th century.
The second photograph shows the south doorway. The very tall semi-circular rere-arch is 12th century Norman, but is clearly a development from Saxon architecture when doorways were tall to facilitate the passage of processions with tall banners.
One of two 12th century deeply splayed lancet windows in the north wall of the nave is shown in the third picture. The north wall of the nave also has a 15th century window, and , between the two lancet windows and opposite the south doorway, a 12th century blocked doorway.
The west wall of the chancel is shown in the first picture of the second gallery. The chancel arch is the original 12th century Norman one. The  two hagioscopes can be seen, one either side of the arch. These allowed members of the congregation to see through to the altar, particularly for the ‘elevation of the host’ (raising of the consecrated bread and wine). Hagioscopes are also known as squints.
Photograph two is of a 15th century window in the north wall of the nave. New glass was fitted when the window was renovated in 1905/1906. The left hand side is a scene depicting the biblical story of Ruth and Naomi, and on the right is Jesus as the Good Physician.
The piscina on the south wall of the chancel is 13th century and has a trefoiled head and rather ornate semi-circular capitals.
The font, which is the second largest in Sussex, was made from a single piece of stone. It is 12th century and has early 16th century carvings of fleur-de-lys, foliage, Tudor roses and scallop shells, the last being the symbol of St James of Compostella. The font cover is late Victorian (1898).
There are murals of different dates on the chancel wall, but they are quite feint and difficult to make out. Masonry lines in red, probably 13th century, have been painted over 12th century designs, now largely indiscernible. Added in black, in the late 16th century are a representation of the sun, and verses from the bible of which only two of the Ten Commandments are legible (Thou shalt not commit adultery, and Thou shalt not steal).