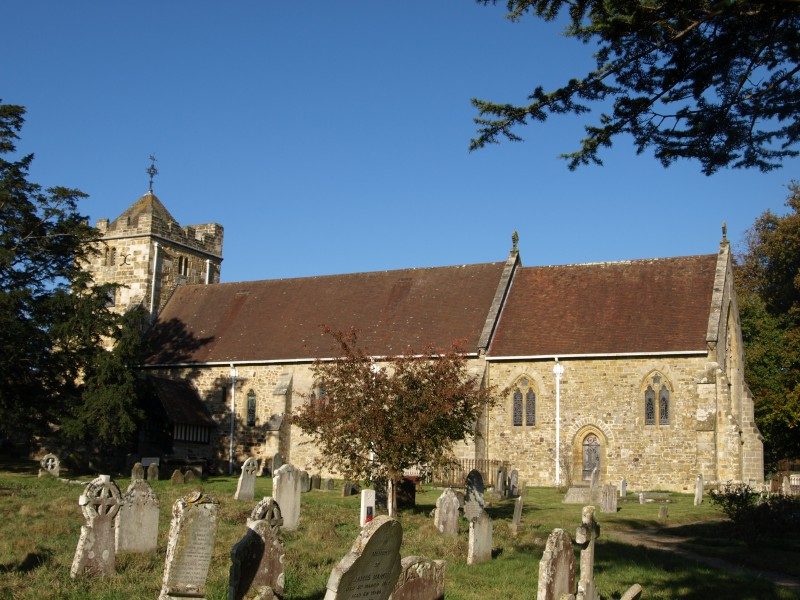 The main photograph is of St Mary’s from the south. The church dates from c1080, and a small part of the south wall either side of the porch, and an early Norman window just to the east of the porch roof, survive from that time.
The porch itself is very old, dating from c1400. and with many of the original timbers remaining.
The first picture in the gallery is a view of the west tower which was built of sandstone ashlar in the early 15th century. There is an octagonal stair turret and two large diagonal buttresses. The clock was installed early in the 18th century. There are head stops to the west window, and to the depressed head doorway, which is shown in the second photograph.
The third photograph shows the nave which was largely rebuilt in the 13th century, when the original chancel was also built.
There are no less than fifteen stained glass windows at St Mary’s, installed at various times between 1864 and 1986. Ancient, probably 14th century glass has been incorporated into the heads of the south chacel windows. The gallery above features just some of these beautiful windows. The first photograph is of the sole remaining Norman window, and a 13th century window with glass from 1913 depicting ‘The Light of the World’.
The next picture shows the arch between the chancel and the choir aisle. Extensive works in 1886/7 included rebuilding of the chancel, extending the nave and north aisle, and construction of the choir aisle and organ chamber. The window seen through the arch is shown again in the third photograph. The glass was installed when the choir aisle was built in 1887, and shows the Blessed Virgin Mary and the Child Jesus.
The fourth photograph is of the choir aisle east window with glass, dating from 1906, depicting angels with various musical instruments, and text from Psalm 150.
The next picture is a general view across the nave towards the north arcade and chancel. Finally in this gallery is the view in the opposite direction towards the tower arch. The 3-light west window in the tower has 1892 stained glass depicting Anna, The Risen Christ, and Phoebe.
The final gallery has three photographs of the stunning chancel, beautifully redecorated in 1902/3. The first picture shows the wagon roof painting, as well as the reredos and 3-light east window with contemporary glass depicting ‘The Adoration of the Ascended’.
Next is a view of the north wall of the chancel. The upper wall decoration is gold and blue stencilling on a gesso background (white paint mixture with chalk and/or gypsum base). Below a moulded string course there is a ‘dado’ of dark red border tiles over blue and yellow decorative tiles complimenting the stencilling above. The 2-light north chancel window has stained glass dating from 1895, depicting the Annunciation.
The last photograph shows the trefoil headed sedilia and piscina on the south chancel wall. They were originally 14th century, and have been restored and reset in the new chancel. The 2-light south window depicts the Purification.