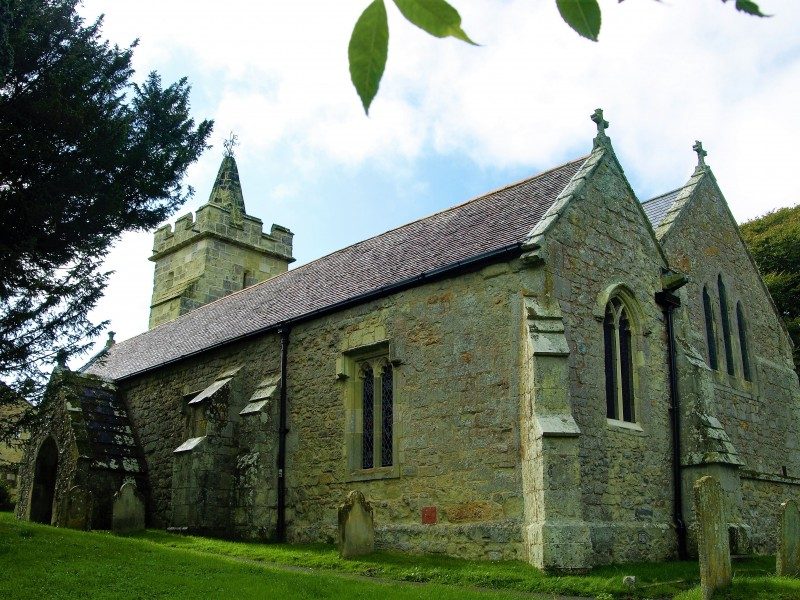 The church of St John the Baptist at Niton dates from the 11th century, the west wall of the nave and the north arcade columns being early Norman. The north and south side walls of the nave were lost when a north aisle was built late in the 12th century, and a south aisle in the 13th century.
A chancel was added late in the 13th century, but was re-structured in the 14th century. The 13th century chancel arch remains. Also in the 14th century, a south porch was added.
By the 15th century it seems that the north aisle had fallen into disrepair and was taken down. It was rebuilt in 1864 at the time of a general Victorian restoration.
The south aisle was extended eastwards in the 15th century to form a south chapel, and a doorway to this was formed through the south wall of the chancel.
The west tower with three stages and crenelated parapet is 16th century, and a stone spire was added during the following century.

The first photograph in the gallery below shows the 13th century chancel arch and chancel beyond. The nave, aisle and chancel roofs were boarded during the Victorian restoration. The chancel roof is divided north to south in eight sections (cants) of dark oak boarding with floriated bosses in eleven designs at the cant junctions.
The second photograph shows the modern reredos below the 3-light east window in the chancel. The reredos features Jesus Christ with arms raised in blessing, flanked by archangels Raphael, Michael, Bricael, and Uriel.
Next shown is the circular tub font which dates from c1070. The bowl was hewn from a single piece of stone and has a cable carving around the rim.
The fourth photograph shows the 2-light window in the south chapel. The stained glass is unique in that the left-hand light depicts Christ with his left hand raised in benediction (with thumb and first two fingers up and the fourth and fifth fingers closed).
Next shown are two fine carved oak chairs which date from the 17th century, one having an unusual double swansneck top.
The penultimate photograph is one of four wall monuments in the south chapel. It is a memorial to one George Arnold (d 1806) and depicts a woman holding a pelican with her young, this being a symbol of the Resurrection. On the front of the monument is a medallion with carved portrait, by John Flaxman, of the said George Arnold Esq.
Finally, the last photograph is of a painting which is a modern interpretation of the Crucifixion.