The North Downs and Surrey Hills

The range of chalk hills collectively known as the North Downs run from the White Cliffs of Dover in Kent to the Hog’s Back between Farnham and Guildford in Surrey. The North Downs include two Areas of Outstanding Natural Beauty (ANOBs), the Surrey Hills in the west and the Kent Downs in the east. The North Downs are intersected by five main river valleys and several other ‘dry valleys’ no longer having rivers, and now forming wind gaps as at Caterham for example. The main rivers from west to east are, the Wey and the Mole, which are tributaries of the Thames, the Darent(h) which flows to the Thames estuary at Dartford, the Medway and the Stour.

The North Downs Way is a long distance path that runs 156 miles from Farnham in Surrey to Dover in Kent. It was opened in 1978, and runs for the most part along the ridge of the Downs, with the highest point, at 876 ft being Botley Hill in Surrey. On the southern slopes of the Downs there is a prehistoric trackway dating probably from the Stone Age, and later becoming known as the Pilgrims’ Way after it was used by pilgrims to travel from Winchester to the shrine of Thomas à Becket at Canterbury. At places the two long distance paths use the same route.

The churches along the North Downs were built with extensive use of flint from the chalk hills, but with other building materials incorporated, unlike the South Downs churches which are more exclusively flint built. Bargate stone from the Greensand Ridge, which runs to the south and roughly parallel to the North Downs, was used (as at St Nicholas, Compton), and ragstone or Kentish rag, a hard limestone quarried from the Lower Greensand, was combined with the flint (as at All saints, Stourmouth). St Nicholas Church at Barfreston has Caen stone in the upper walls above flint lower walls. The intricate carving at St Nicholas Church, Barfreston is one of the most important examples of  late 12th century architecture in Europe, but this is just one of the interesting, rare and/or beautiful items at the North Downs churches. 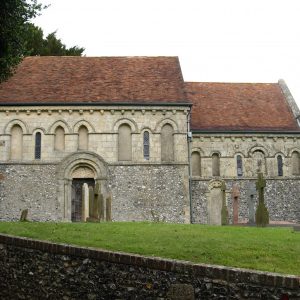 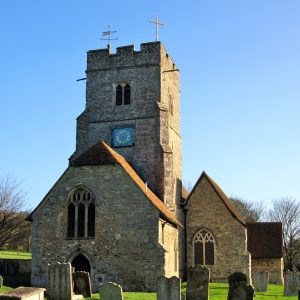 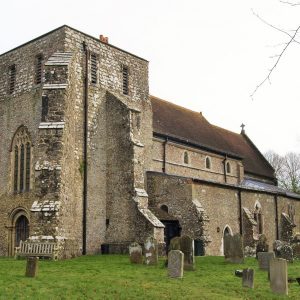 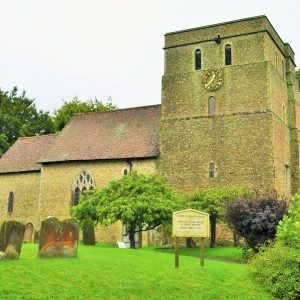 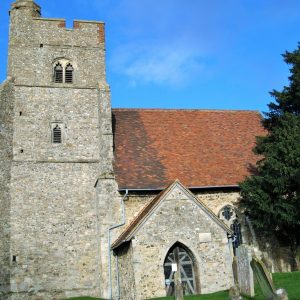 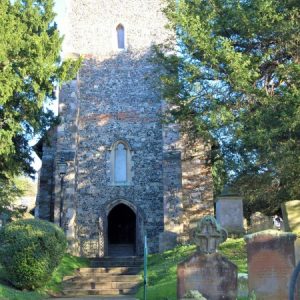 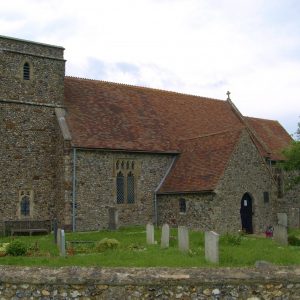 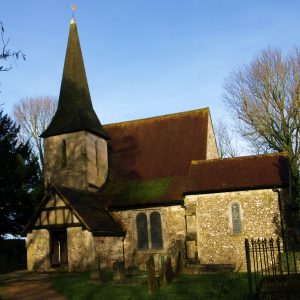 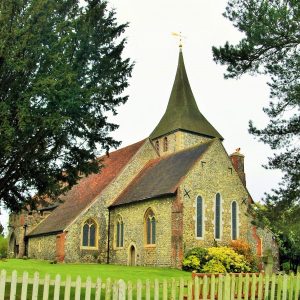 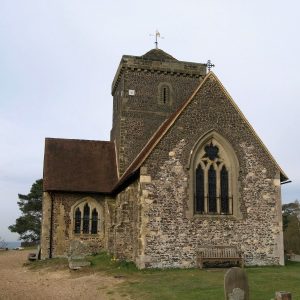 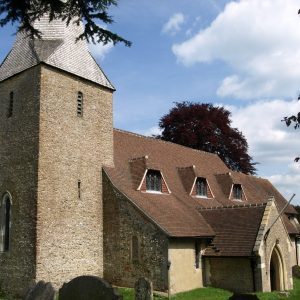 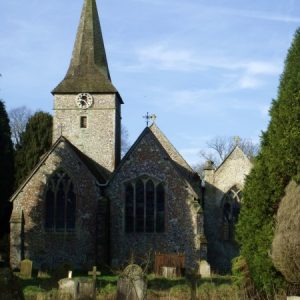 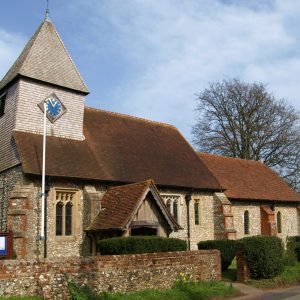 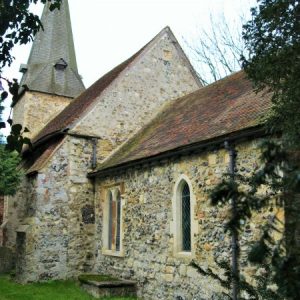 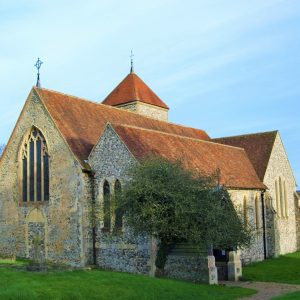 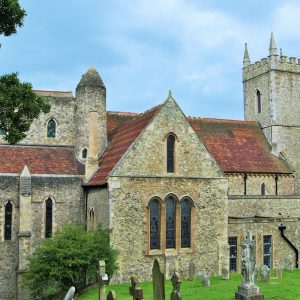 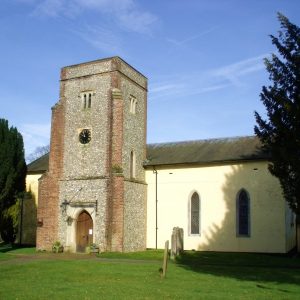 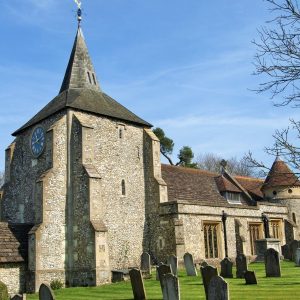 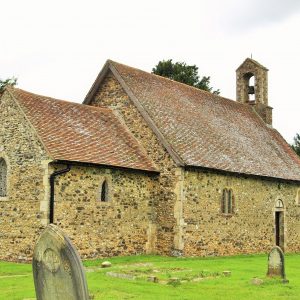 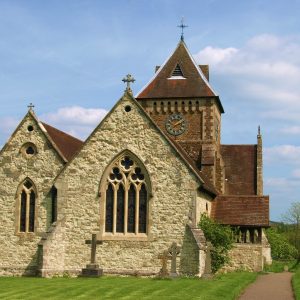 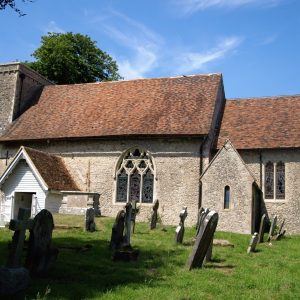 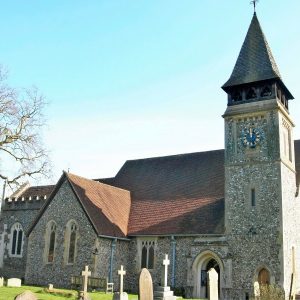 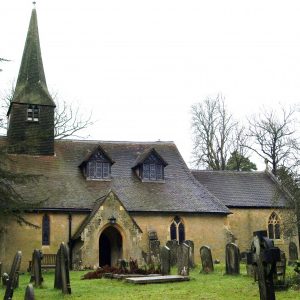 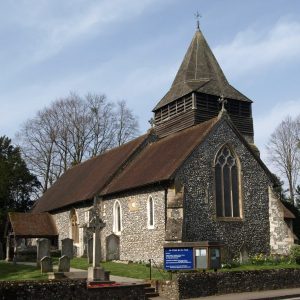 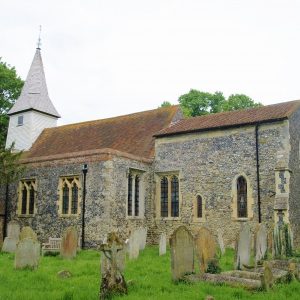 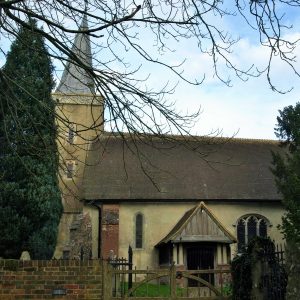 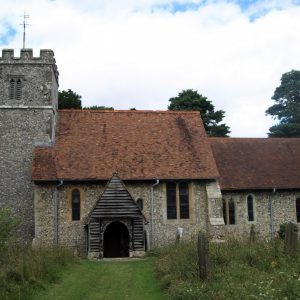 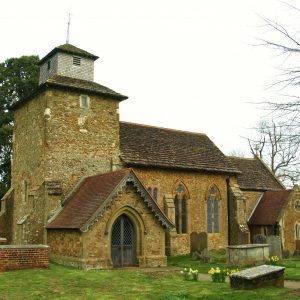 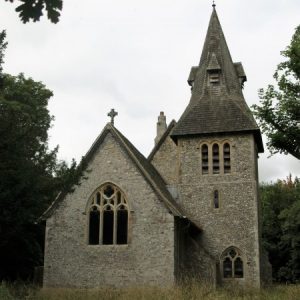