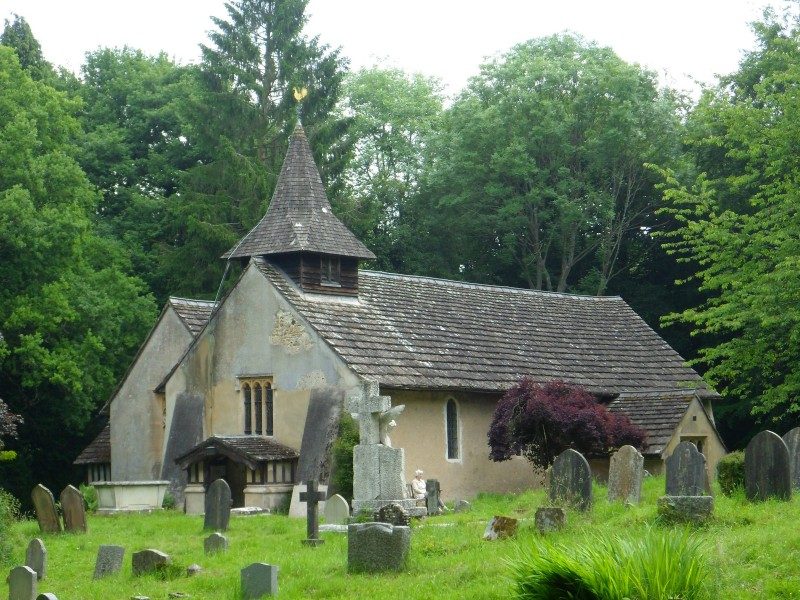 St John the Baptist, Oakwood Hill (formerly Okewood Hill) was originally a chapel of ease to Wotton. It was built c1220 of hard chalk and firestone rubble which was rendered, and has a Horsham stone slate roof. Apart from some limited modifications in the mid 15th century, including extending the nave, the chapel remained largely unaltered until the late 19th century when the building was extended to twice its original side by the addition of a north aisle, vestry, new spire and north and west porches.
Over the years, major repair works have been necessary at St John’s, including in the mid 15th century, throughout the first half of the 18th century, again in 1867, and then only 12 years later when extensive rebuilding was undertaken in 1879. Further works were carried out in 2014.
The first picture in the gallery is a view from the nave looking east towards the chancel. The 3-light east window has stained glass installed in 1871, depicting Zacariah, The Baptism, and John the Baptist.
Next is a view looking in the reverse direction towards the west entrance. Both photographs show the medieval crown post roof  with square panelled ceiling.
The third picture shows the two 13th century lancet windows in the chancel south wall. The top sections of glass are ancient, dating from the 13th – 15th century. The modern glass in the main lights, dating from 1912, depicts the Annunciation, on the left the Archangel Gabriel and on the right, the Blessed Virgin Mary.

The first picture in the gallery above is of a priest’s doorway in the chancel south wall. The doorway is original, but the door itself would have been renewed at some stage. Above the door is a 13th century wall painting of one of the Apostles, possibly St James the Great or St John the Baptist, to whom the church is dedicated.
Next is a photograph of a second mural, the other side of the chancel lancet windows. It is of the Annunciation.

The third photograph is of the fine piscina in the chancel. It has a trefoil head and a credence shelf for holding items used in the Eucharist (Holy Communion).

The fourth picture is of a 15th century brass in the former chancel floor, 6” below the current floor level. It is protected by a sheet of plate glass and is perfectly preserved. It shows a man in full armour and has a Latin inscription which translates ‘Here lies Edward de la Hale Esquire of the county of Surrey who died the eighth day of the month of September AD 1431. May God have mercy on his soul. Amen.’
The final photograph is of the 19th century black marble font with moulded circular bowl on a fluted round stem and an octagonal base.