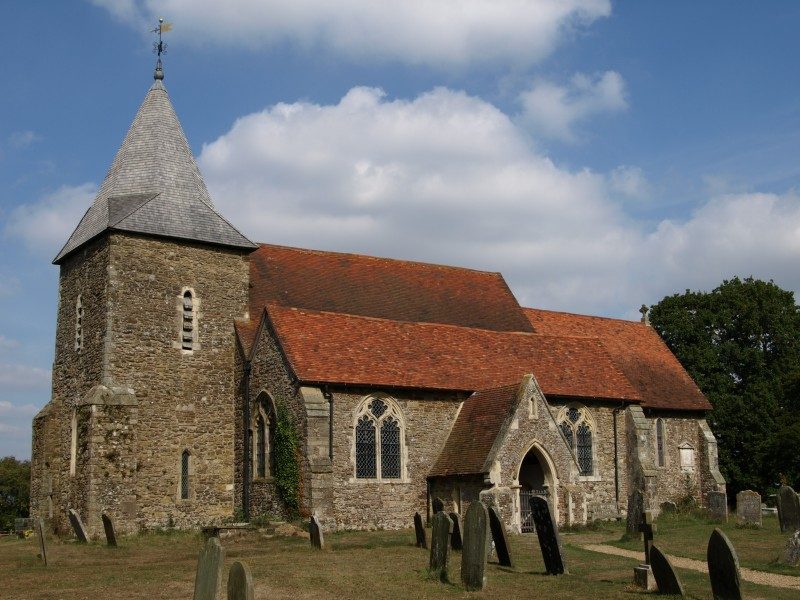 The church of St Peter and St Paul viewed from the south, is shown above. Parts of the original Norman church, built c1070, have survived, including the west and east walls of the nave and about half of the chancel. The fine Norman chancel arch is particularly interesting, being decorated with stylised heraldic animals. The leopard-like creatures have been carved into the iron-sandstone of the arch masonry and are a unique feature of the church.
Approximately 100 years after the original build, a tower with broach spire was added to the west end of the nave. Also towards the end of the 12th century, north and south aisles were added, with arcades of transitional Norman/Early English arches.
The chancel was lengthened during the 13th century, and in the late 15th century, the height of the north aisle was increased, and a porch was added to the south. The latter was replaced during the 19th century, when several restorations were undertaken by the Victorians, including external repairs and internal fixtures.
The first picture in the gallery is of the chancel arch. To the south of the arch there is a medieval squint, and above the arch is a large painted plaster panel inscribed with the Lord’s Prayer, the Apostles’ Creed (a summary of the apostles’ teachings) and the Ten Commandments. The next two photographs are of the carvings on the chancel arch right and left responds. They appear to represent either leopards or lions, and have been dated to the late 11th century.
Similar carvings are found on the external chancel wall and buttresses. The first two pictures in the gallery below show the south wall of the chancel where a carving, again probably of a lion or leopard, is set above the priests’ door between two lancet windows. The second picture is a close up of this carving.
The third photograph shows the carving of a stag which is at the base of the south-east buttress to the chancel. The fourth picture is of the carving of a flying bird which is set high up on the north-east buttress to the chancel. From their stylization, it seems that all three of these external carvings are contemporary with the chancel arch ones.
The fifth picture in the second gallery is of the 3-light east window which has stained glass, installed in 1936, depicting The Transfiguration.
The final photograph shows the south wall of the chancel. There is a double sedilia with stepped seats, and an adjacent piscina, all with pointed heads and dating from the 13th century. The piscine has a credence shelf, and there is an aumbry in the south eastern corner of the chancel, of similar date.
.