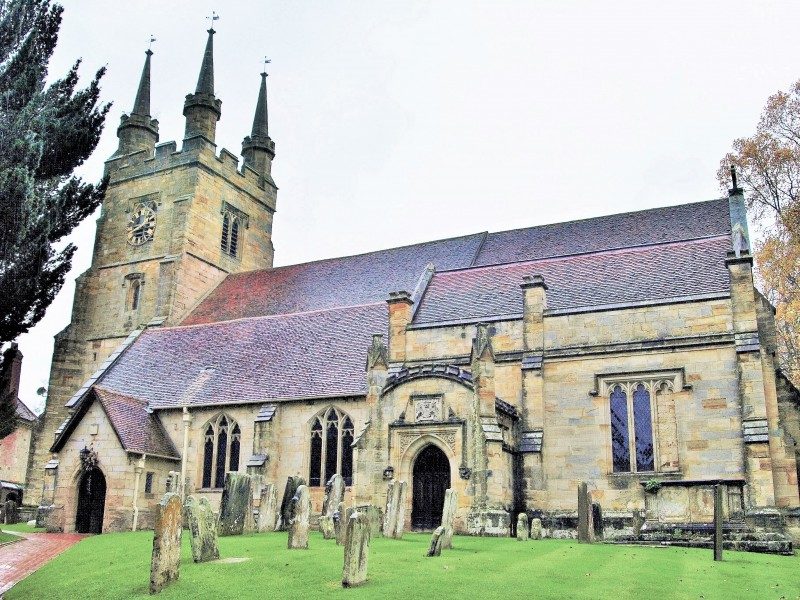 It is thought that the foundations of Penshurst church are Saxon, dating from 860 AD, and the discovery nearby, in 2004, of a large number of Saxon artefacts supports this theory. The present building dates from the early 12th century and the list of vicars starts with Wilhelmus, who was installed by Archbishop Thomas à Becket in 1170, just two days before he was assassinated at Canterbury cathedral.
The main photograph above shows St John the Baptist church from the south. The west tower, built in the 15th century, has an unusual parapet wall with crenellations, and octagonal corner turrets with spirelets, which were added in the 17th century.
The south aisle was widened in 1631. The three light 13th century Decorated style windows were installed in 1864-5 at the time of extensive restoration works. The south porch was also added c1631. The south (Sydney) chapel was rebuilt in 1820 and has its own porch, perhaps indicating the importance of the successive families who used the chapel and have monuments there.
The first photograph in the gallery above shows the nave and chancel looking east. The church was originally constructed as a simple rectangular building, without a chancel arch, but in 1865-6 a timber arch with open tracery, supported on ornate angel corbels, was added.
A very fine chancel screen, carved  from local oak in Perpendicular style was erected in 1897.
The next picture is of the octagonal font which dates from the 15th century. The bold colours used to decorate the quatrefoils on the bowl and the tracery on the stem are possibly reproductions of original colouring, although this is open to question.
The third photograph is a view looking back towards the nave from the chancel. The four-bay crown post roof and the clerestory windows were installed in the late 15th century.
Below in the gallery, the first picture is of the finely carved pulpit which is inlaid in mosaic around Roman style heads, and has marble pilasters. It dates from c1865.
Next, there are three pictures of fine memorials at Penshurst. First shown is one of two 13th century coffin slabs, now displayed on the tower wall. This one depicts the figure of a praying woman, with a cross carved in the foreground.
The second of the three memorials shown is a carved Gothic tablet with a medallion, to 1st Viscount Hardinge GCB PC (d. 1856). Field Marshall, Henry Hardinge was a most important Victorian soldier and politician, who was Secretary at War to Wellington and later to Sir Robert Peel. He went on to become Governor General of India and Commander-in-Chief of the Forces during the Crimean War.
Next is a memorial to one John Palwater d. 1577, servant and steward, firstly to Sir Thomas Ebeney, Knight of the Garter, Lord Warden of the Cinque Ports, and then to Sir Henry Sydney, Lord President of Wales and Lord Deputy of Ireland.

Shown fifth in the gallery above is the south chapel at St John the Baptist, the family chapel for the Sidneys of Penshurst who were Earls of Leicester from 1618 to 1745. The Sidney family have lived at Penshurst Place for over 450 years. The little adjoining square of houses was named Leicester Square after the Earls of Leicester, and pre-dated the Leicester Square in London where the Sidneys had their ‘town’ residence.
The current Sidney chapel was rebuilt in 1820. It has a fine tunnel vaulted ceiling which is panelled and painted with heraldic shields on a background of intertwining foliage. The Sidney chapel has a wealth of monuments to Sidney and other family members. The final picture in this gallery shows a wall monument with ‘altar’ tomb-chest in memory of Sir William Sydney to whom Penshurst Place was given by King Edward VI in 1552.

The first picture in the gallery above is of part of a recumbent figure, in Purbeck marble. This is a memorial to Sir Stephen de Penchester d. 1299. Next to this in the floor is a brass to Margaret Sidney d.1558.
Next shown are three more floor brasses. The first is in memory of Thomas Bullayen, brother of Anne Boleyn. The second is to Bridget and Alice Sidney, both died 1599, Alice aged 6 months, and Bridget aged 2 years 4 months.  The final brass is in memory of Thomas Yden d.1514 and his wife Agnes.