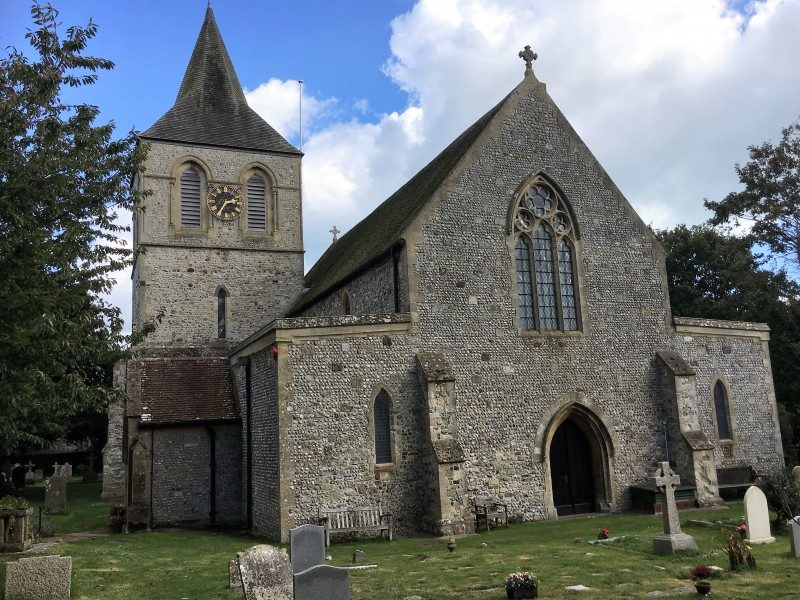 The Church of St Nicolas at Pevensey, as with many parish churches, stands on the site of a succession of earlier religious buildings, the first here perhaps dating from as long ago as the Roman era. The present building, however, is largely unaltered Early English, the oldest part being the chancel which dates from 1205. The nave was completed a little later, c1216. The completed building is a fine example of Early English Gothic architecture.
The first photograph in the gallery below is of the nave and ‘weeping’ chancel, the latter being offset to the north symbolising Christ’s head falling to the side on the Cross. The chancel arch is tall and pointed, and the columns have carved stiff leaf capitals, shown closer up in the second photograph. The outer order has a carved head above the moulded string course.
The third photograph is of the chancel which, at 55ft in length, is nearly as long as the nave. The chancel roof is the original one, the oak timbers dating back to the early 13th century. Sometime after the Reformation, the chancel became disused, and in the 17th century a wall was built across the church, under the chancel arch. The dilapidated ‘chancel’ was then used as a cattle byre, and for storage. It remained like this until the major restoration carried out between 1875 (when Archdeacon Robert Sutton took over the rent of the chancel) and 1879. Further repairs were carried out during the Victorian era including rebuilding the north chapel in 1882 and re-constructing the top stage of the tower and adding the shingled spire in 1893.
The fourth picture is of the altar and three lancet Early English east window. The stained glass was installed after 1875, and depicts the Ascension in the top sections. The bottom sections from left to right show: Jesus saves Peter from drowning; the Presentation; the miraculous draught of fishes.
The first photograph in the gallery below shows the north transept with spiral staircase up into the tower. The single lancet north window of the transept has stained glass, installed in 1926, depicting St Dunstan.
The next photograph is of a typical Early English two lancet window in the north aisle. The stained glass depicting The Vision of Christ was fitted in 1957.
The third picture is of another Early English window, this one a twin window in deep mouldings in the south chancel wall with glass depicting evangelist symbols.

The fourth photograph in the gallery is a view of the nave looking west through the chancel arch. Showing, are the arcade arches, of which there are three leading to the north aisle and five to the south. There are clerestory windows, unusually placed between the arches rather than centrally above them. The oak ‘waggon’ roof dates from the restoration in the 19th century, but the tie beams and king posts are original 13th century.
Next is a picture of the John Wheatley memorial which is carved in alabaster. John Wheatley who died in 1616 was a wealthy local philanthropist. He contributed funds to the war levy at the time of the Spanish Armada in the late 16th century.
The final photograph shows the square Caen stone Norman font. The suspended font cover dating from c1890, was finely carved locally.