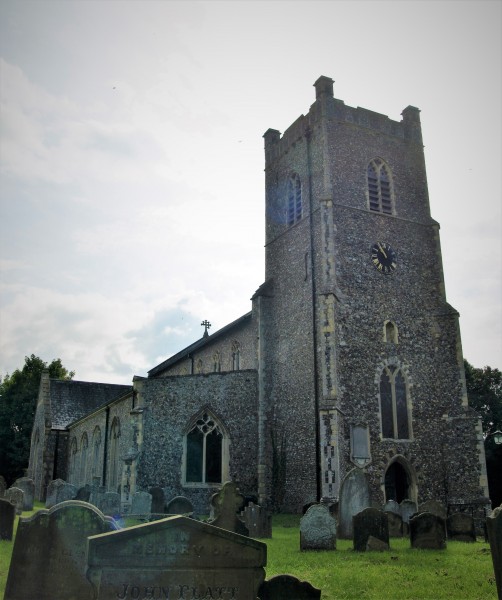 The church at Saxmundham is recorded in the Domesday Book of 1086, but little of that building has survived, save for some stonework in the lower stage of the tower that differs from the rest of the tower masonry which is 14th century. The west doorway and the 2-light window above it, and the tower belfry openings are all early 14th century Decorated Gothic.
Much of the remainder of St John’s dates from the 15th century, although it was heavily restored in Victorian times. The nave arcades and fine hammerbeam roof are 15th century, but the chancel arcades and the chancel arch date from the 1873 restoration.
Unusually, the ‘weeping’ chancel is offset to the south rather than the north as is more common.
The first photograph in the gallery below is a view looking east along the nave. The 4-bay north and south arcades are of octagonal columns with triple-chamfered arches. Also showing are some of the 2-light clerestory windows, and the easternmost hammerbeam roof wall posts which are supported on carved ‘angel head’ corbels. The angle of the weeping chancel can clearly be seen.
The second photograph is a view in the opposite direction towards the tower arch where there is a modern glazed gallery enclosing the bell ringing room. The west window includes one piece of medieval glass depicting an angel’s head.
Next shown is one of the Decorated style 2-light clerestory windows. The easternmost one of six clerestory windows above the south arcade has an inscription – ‘Sanct Johannes, ora pro Nobis’ ( Saint John, pray for us ). The lettering shows signs of a possible attempt to obliterate it with black paint.
The fourth photograph shows a south window in the south aisle. It features Flemish roundels with depictions of various biblical scenes originally produced in the Netherlands in the 16th century.
The next photograph includes a view of the 2-light east window in the south aisle. The Victorian stained glass represents, on the left, Jesus with the inscription below ‘Jesus saith unto him I will come and heal him’, a biblical text from Matthew, and on the right, St John the Baptist with inscription ‘can any man forbid water’, a biblical text from Acts.
The early 15th century octagonal font is shown next. It is typically East Anglian in style, and has been skillfully re-cut to preserve the carvings of angels alternating with lions around the bowl, and woodwoses alternating with lions around the stem.
The final two photographs are of a unique headstone in the churchyard at St John’s. This headstone, on the grave of one John Noller (d.1725), is carved with recesses which act as a sundial. The first picture is of the east side which has markings 7 – 11 for the morning hours. The second picture is of the west face of the headstone with afternoon hours marked 1 -5.
Further reading:
The Guide to Suffolk Churches